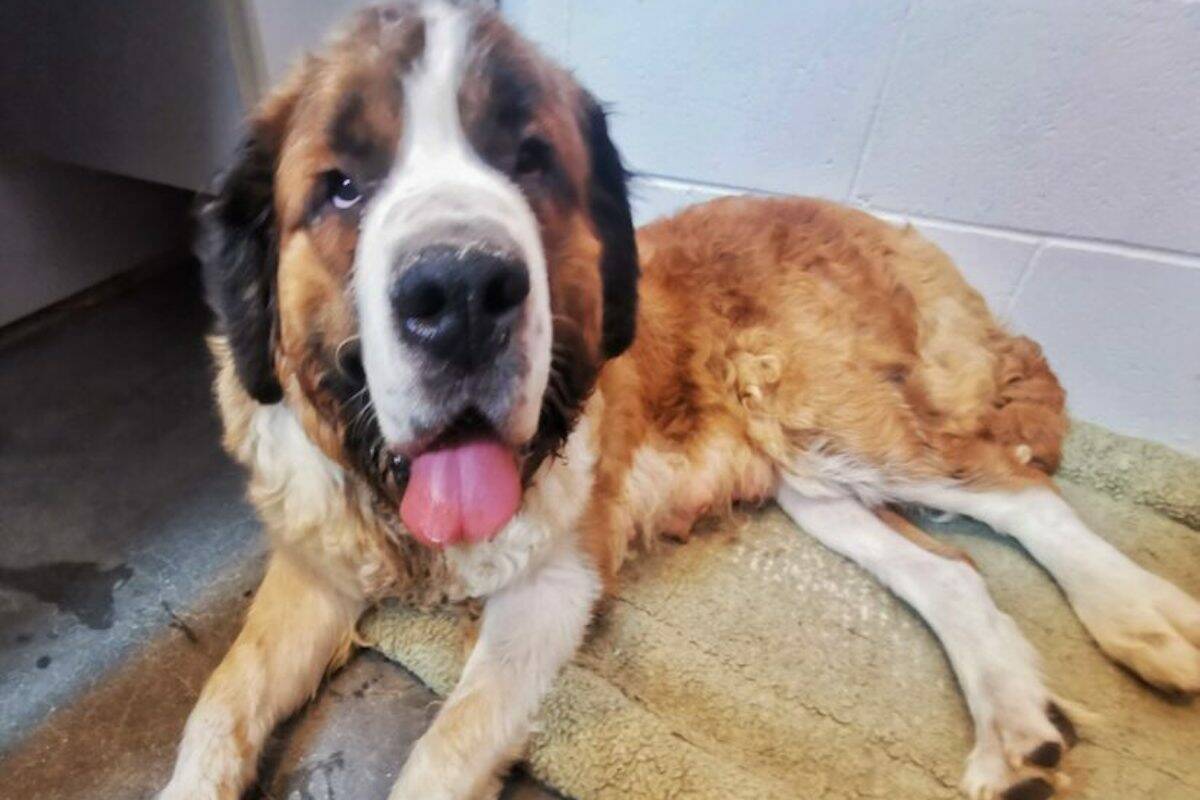 Bailey when first in BC SPCA care. 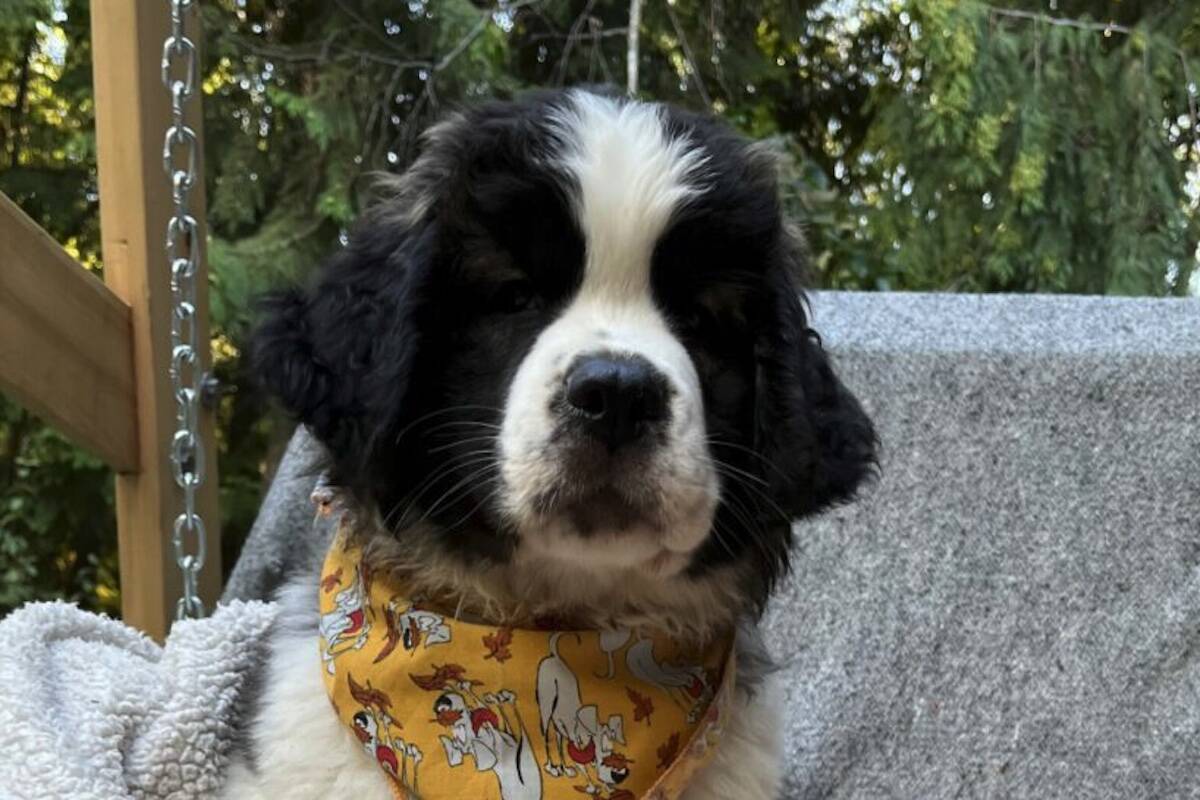 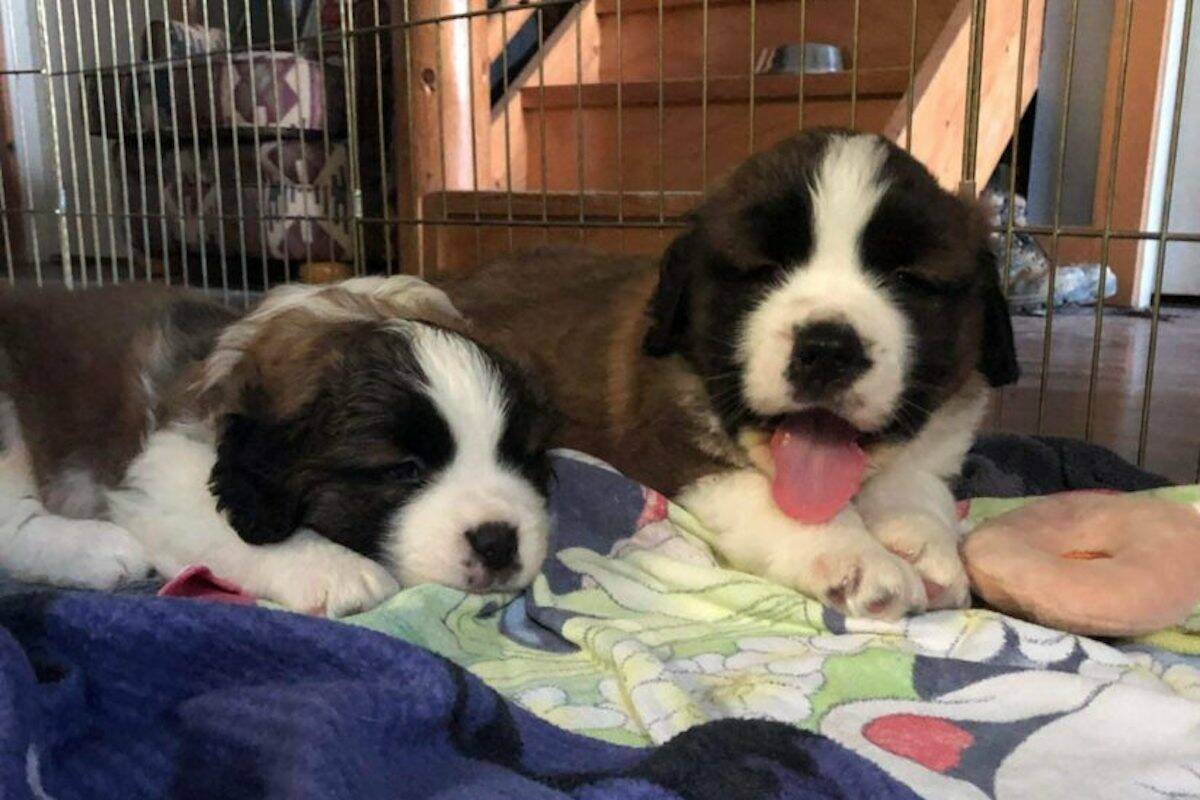 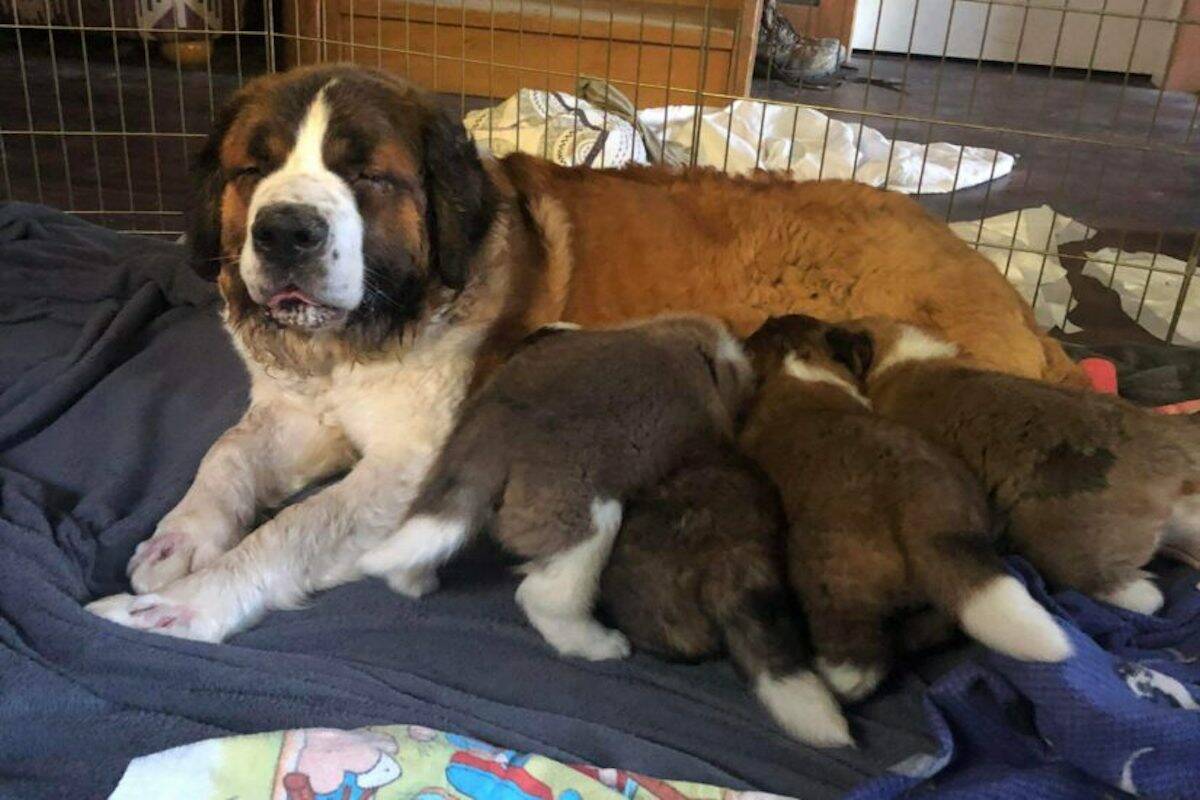 Baily and her puppies. (BC SPCA)

It was the love, care and overwhelming attention that helped a neglected St. Bernard and her puppies transform into happy, healthy dogs.

Bailey was nursing her five puppies in unsanitary and substandard conditions when the BC SPCA discovered her. The St. Bernard was taken to the Shuswap shelter, where animal care attendants discovered her to be underweight, with multiple abscesses on her feet, long nails that were growing into her pads and fur full of mats and feces.

Isabell Diederichs, an animal care supervisor at the Shuswap branch of the BC SPCA, said Bailey underwent extensive grooming, had to have two surgeries for her swollen feet and is on a specialized diet to help her safely gain weight. She is also suffering from inverted lower eyelids that will require double entropion surgery to repair.

“When we were looking for a foster home for Bailey and her pups, I knew it was going to require the commitment and support of an entire family,” said Diederichs.

That is when a Shuswap family stepped up to provide around-the-clock care to help Baily and her pups recover.

Dad Mike, mom Donna, Mikaela and her two brothers Tristan and Sam came together and for the first time decided to try fostering animals.

“We eased into it with six St. Bernards,” laughed Donna. She is an early riser and gets up with the puppies at 5:30 a.m. to bring them outside to potty train and play.

“House training five puppies at once has definitely been the biggest challenge,” she said. “The cleaning is constant.”

Everyone in the house had a shift, with Mike working from home taking the day shift to feed the pups at noon and taking the dogs out to play.

Mikaela works weekends, so she takes the day shift on her days off during the week and her brothers take shifts on the weekends.

According to Donna, Bailey is an amazing mom.

“When we were getting ready to transport her from the shelter to our home, Bailey wouldn’t get into the vehicle until all of her puppies were loaded into the car and she wouldn’t get out of the car until all of the puppies had been unloaded,” explained Donna.

Bailey was very shy when she first arrived at her foster family’s home but is slowly coming out of her shell.

“She doesn’t understand how to play with toys, but she does ‘play bows’ and accepts belly rubs which she didn’t do before,” said Mikaela.

One of the biggest perks of taking care of puppies is watching them start to develop new skills. The family lives on a sloped property and one of the puppies’ favourite things to do is go up one of the hills and roll down.

“They are like pudgy teddy bears,” said Mikaela. “It is so much fun for them and we get such a kick out of watching them.”

All of the puppies have amazing personalities and quirks, but one puppy really stands out.

“Frangelico is hilarious. She is so sassy and is the ring leader and she has been that way since the beginning,” said Mikaela. “She is always the first one to do anything. And if they are being mischievous, she is right up front leading the way.”

Donna has some advice for anyone who is considering fostering, “be committed to the amount of work it is and keep your focus and goal in mind.”

Baily and all five of her pups have now found their forever homes and have been adopted.

Research off B.C. coast aims to shake our understanding of megathrust earthquakes