The Kootenay Ice’s destiny is no longer in their own hands, but the team is still planning to give it everything they’ve got down the stretch.

While every game has been ‘must-win’ for awhile, now seven points out of a playoff spot with only five games remaining, mathematical elimination could occur at the end of Friday night.

The Ice host the Regina Pats, and should they lose while the Red Deer Rebels beat the Medicine Hat Tigers, their postseason aspirations will be dashed. If they win or Red Deer loses, they’ll live to fight another day, but the team knows that they basically need to close out the season with wins and also have Red Deer lose several games. 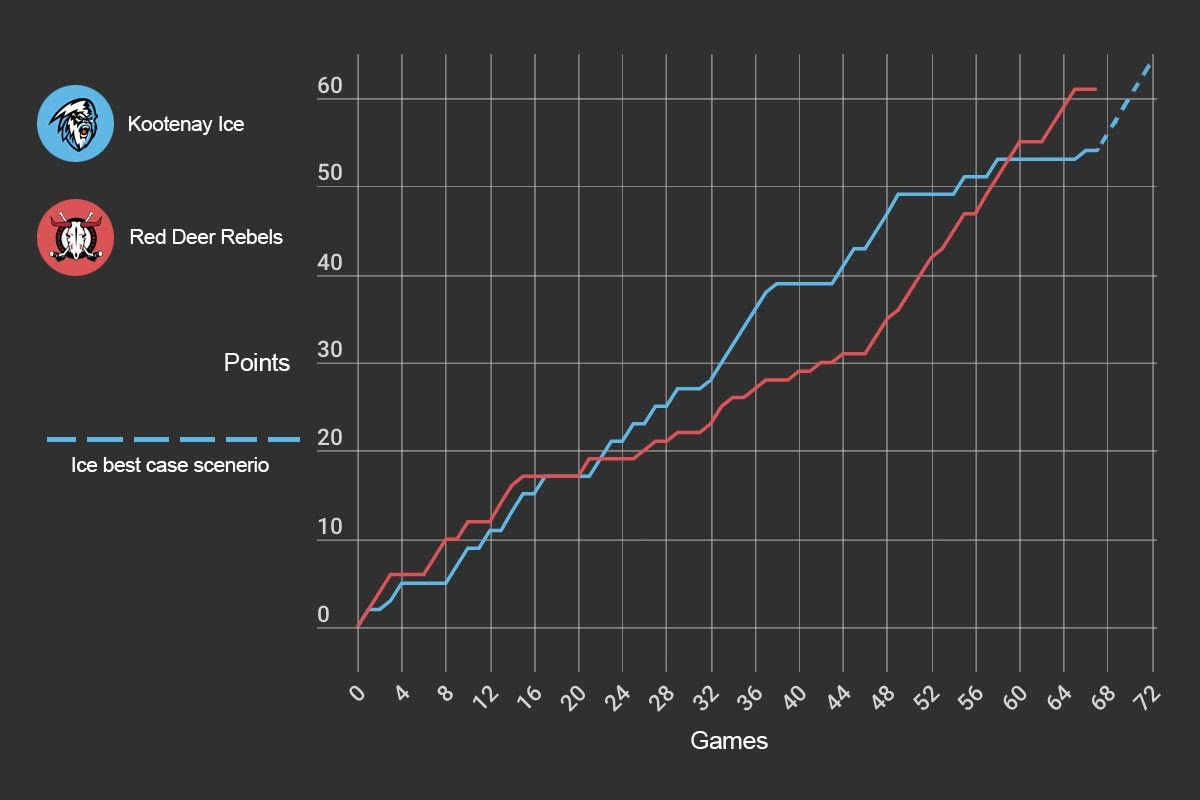 “We still have some hope, [but] we need a lot of help,” said head coach James Patrick after practice on Wednesday afternoon. “We’ve put ourselves behind the eight ball, but all we can do is play as hard as we can… that’s what I expect from every guy, every day in practice. We’re here to get better and we’re going to take that mentality into the game on Friday.”

While the Ice will certainly have ample motivation, the Pats should provide a formidable challenge. Kootenay won their last matchup on February 9, but Regina has really hit their stride since then and are currently on a three-game winning streak with a 7-2-0-1 record in their last ten games.

The Memorial Cup hosts have a plethora of offensive and defensive talents, highlighted for local fans by defenceman Cale Fleury, who served as the Ice’s captain until being traded to the Queen City in November.

“Regina is a great squad [and] they’ve put something good together for the Memorial Cup, and any time you [face a team] like that, you’re going to come up extra hard,” said Ice rookie forward Peyton Krebs. “Fleury is [an] old teammate too, [so] it’s always nice to beat him for sure.”

In addition to Fleury, the Pats’ roster is filled with top-end players and NHL prospects. Their scoring leader is overager Cameron Hebig, who has 88 points in 63 games, followed closely by last year’s WHL top scorer and player of the year, Sam Steel, who has 77 points in just 50 games.

Regina also has former Medicine Hat Tigers’ star, Matt Bradley, stud-blueliner Josh Mahura and Czech-import defenceman Libor Hajek, who was a standout performer at the U-20 World Juniors in January.

By contrast, the Ice only have one current NHL prospect, Brett Davis, who was a sixth-round pick of the Dallas Stars last summer.

Despite the David vs. Goliath storyline, Patrick said his team knows that they have the ability to beat any team in the league.

“Our guys don’t fear any team out there, because they know, and they’ve seen, that if everyone plays their best game collectively, we have a chance,” the coach said. “You can’t take a shift off. We’re trying to eliminate our turnovers at the lines, and then [have] everyone skating, everyone forechecking.

“When we start gliding and playing the game not at full speed, it just allows the fast teams too much room to operate.”

While Kootenay has struggled recently and are entering the game on an eight-game losing skid, they have a win against each of the top three teams in the WHL under their belt this season, proving they can come up big when they need to.

Hoping to end a two-year playoff drought, the Ice know that every single shift will be important on Friday night.

“You need to compete to the last minute, and if we do that successfully, I think we’ll have a lot better shot for sure,” Krebs said. “[If we] play every shift like it could be our last this year, it’ll help us for sure.”

After a very busy February, the Ice had a week at home, away from game action, this week and should be well rested. Despite the massive obstacles in their way, the postseason is still a very real and tangible goal.

“In the dressing room, we want [to make the playoffs] so bad,” Krebs said. “For me, especially, I want to do it for our 20-year-olds [because] it’s their last year. Also for this organization, I think we’ve had a couple of tough years. For the fans and everyone else, I think it would be huge if we make the playoffs.”

Puck drop between the Ice and Pats is at 7 p.m. at Western Financial Place. It is the team’s second-to-last home game of the 2017-18 season.

NOTES: The Ice are hopeful that defenceman Dallas Hines will return to the lineup this weekend. The 1998-born has been out with an upper-body injury since February 17, but reportedly “feels good and is ready to go.”