With the federal election behind him and a victory secured, Brad Vis is ready to get back to work.

Vis was elected as MP for the riding of Mission-Matsqui-Fraser Canyon on Monday night.

The incumbent Conservative MP had a substantial lead from the first poll to report, and it never dipped below a 30 per cent margin. He declared victory at 10:06 p.m. with just over 58 per cent of the polls counted.

After the declaration was made, Vis said he was “relieved.”

“It was like I was up for a job interview. They gave me my trial period (in 2019) and now I’ve passed the job interview in 2021. I have the approval of the people,” said Vis.

He said this campaign was “more nerve-wracking” than in 2019.

“I had so many volunteers and I think that is a testament to the work I’ve done in the community, that new people just stepped forward … it was a real team effort.”

While he would like to savour the moment, the reality is he needed to get back to work, especially in a riding of this size.

“The first thing I have to do is, I have to work on Lytton. And I have to make sure the federal government gets the money where the money is needed.”

Other priorities for Vis include addressing the growing water issues in Mission and Abbotsford, concerns about flooding and the erosion of the Fraser River and getting all levels of government together.

He explained in the Agassiz and Kent area they hold a forum with the surrounding First Nations bands.

“All levels of government come together. We bring the MLAs, the MPs, mayors and First Nation leadership to talk about and discuss current issues.”

Vis said he has spoken to Mayor Paul Horn who wants to do that in Mission as well.

“I think that’s a really good step forward in building better governance and reconciliation, so that’s something I’d like to see happen.”

That should include the Sto:lo people, the Leq’á:mel, Matsqui and Kwantlen, he said.

While pleased to have won, Vis said the national results show that people were not happy about the election.

“I don’t think a lot of people in this riding wanted an election and I don’t think Canadians wanted this election. That’s why the results are very similar to 2019.”

Vis first won the seat in the 2019 election, taking the MP position from Liberal Jati Sidhu with 42.1 per cent of the vote. They also ran against each other in the 2015 election, with Sidhu winning in an upset by just over 1,000, as a Liberal “red wave” swept Metro Vancouver.

On Tuesday, counting of the mail-in ballots began and results were set to be announced on Wednesday, Sept. 29. In total there are one million mail-in votes to be counted across Canada. 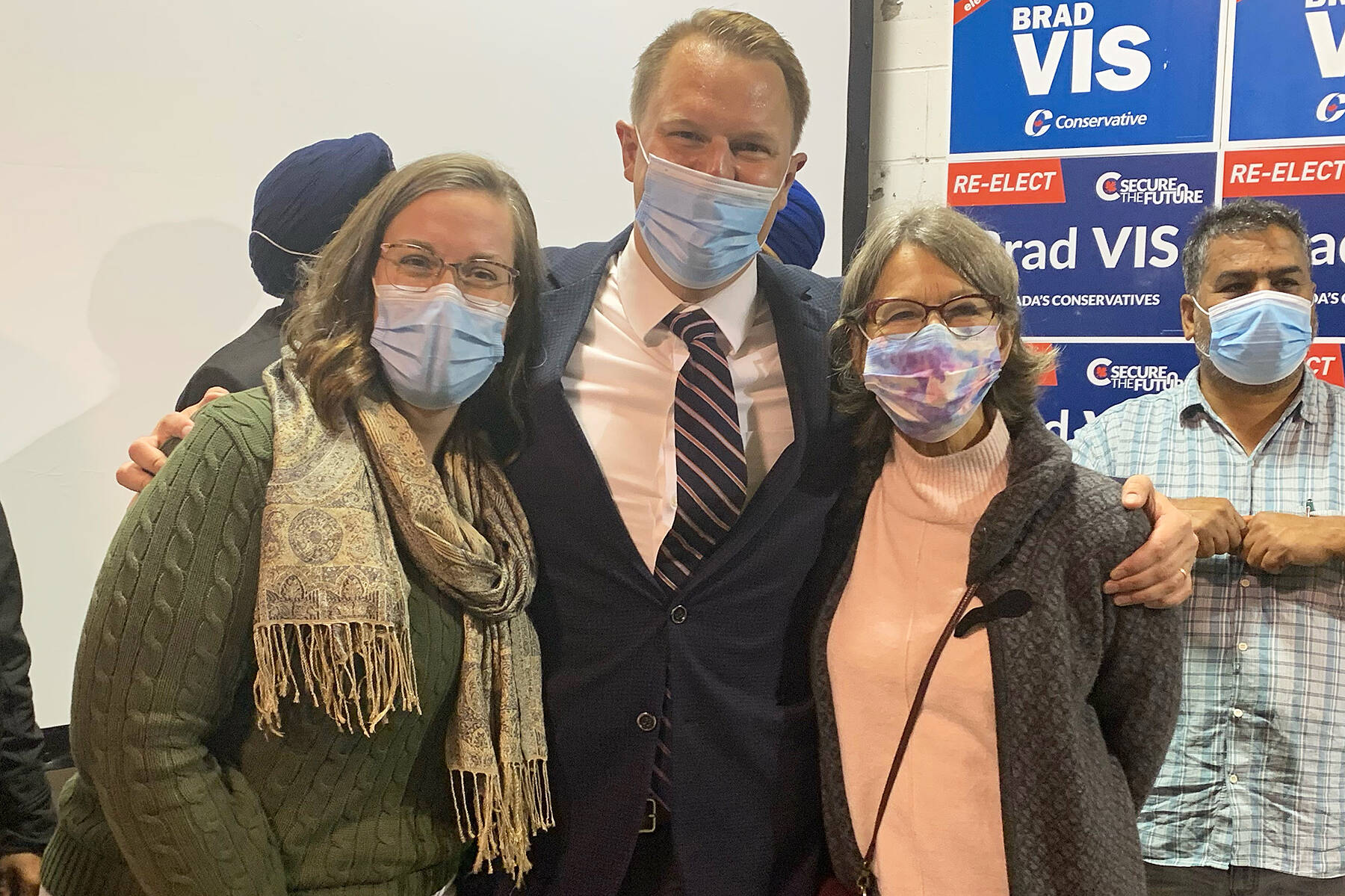 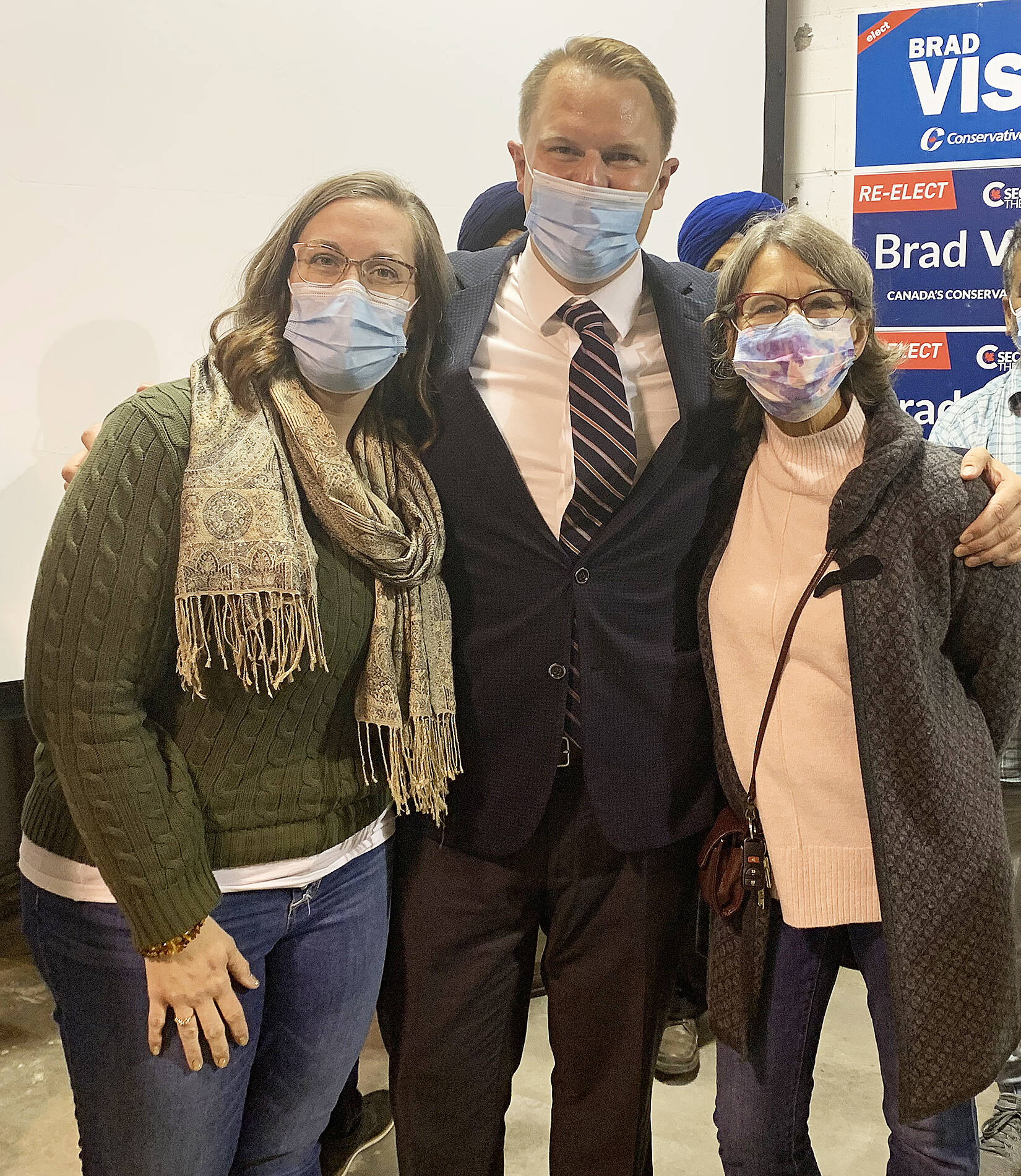 Brad Vis (centre) stands with his mother Diana Campbell and his sister Joanna Scarborough at his campaign office in Mission. Vis was declared the winner in the riding of Mission-Matsqui-Fraser Canyon. / Submitted Photo

Missing motorist found down embankment in West Kelowna after crash