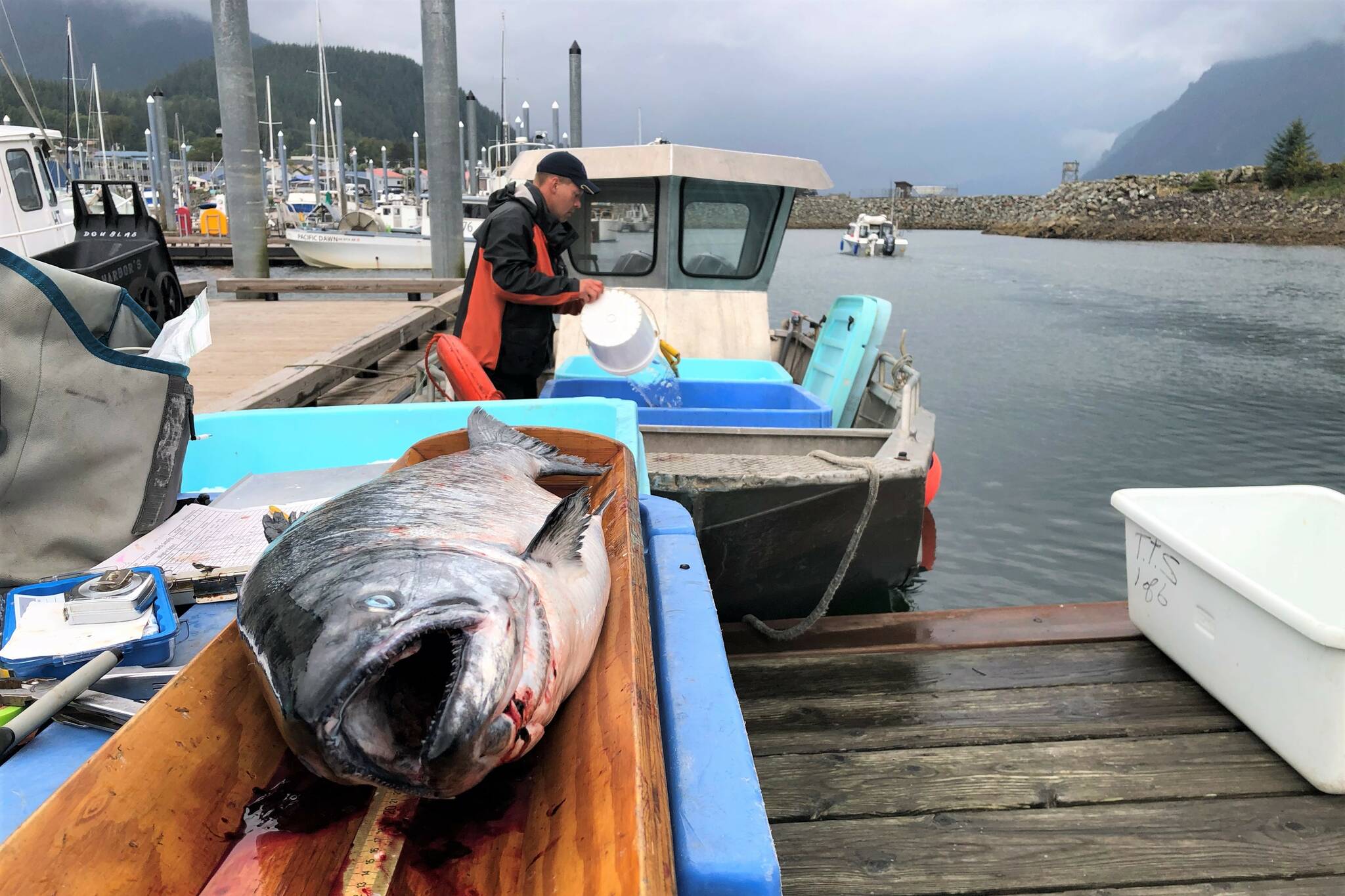 A king salmon is laid out for inspection by Alaska Department of Fish and Game at the Mike Pusich Douglas Harbor officials during the Golden North Salmon Derby on Aug. 25, 2019. (Peter Segall / Juneau Empire)

As Canada closes and restricts its fisheries to protect plummeting wild salmon stocks, a new report suggests that boats in southeast Alaska may be intercepting salmon populations as they return to Canadian rivers to spawn.

Commissioned by Watershed Watch Salmon Society and SkeenaWild Conservation Trust, the report was released in conjunction with the U.S. and Canada’s annual review of bilateral management under the Pacific Salmon Treaty.

This news comes as no surprise to Jessica Hutchinson, Central Westcoast Forest Society (CWFS) executive director and ecologist. CWFS is a non-profit organization that works to restore salmon habitat in and around the Clayoquot Sound.

In recent years, B.C. salmon numbers have hit record lows. Only two wild Chinook salmon returned to the upper Kennedy watershed in 2021, meaning the population has seen a 98 per cent decrease, said Hutchinson.

“Our wild salmon stocks are absolutely on the verge of extinction,” she said. “This is a really, really sad state of affairs and something has got to give. Otherwise, we are going to see stock after stock expire and be extricated from this region.”

Both 2019 and 2020 saw two of the smallest Fraser River sockeye runs within the last 100 years, according to the Pacific Salmon Commission (PSC).

These staggering numbers prompted former fisheries minister Bernadette Jordan to close 60 per cent of B.C.’s commercial salmon fisheries in June 2021. That same month, the $647-million Pacific Salmon Strategy Initiative was launched, which DFO described as “the largest, most transformative investment Canada has made in salmon.”

But Hutchinson said the protection and rebuilding of B.C.’s wild salmon stocks needs to be more than a priority written on paper.

“There needs to be follow through so that we have the protection, the policy measures, and the ability to actually sustain wild salmon in the Clayoquot Sound and along the entire coast of Vancouver Island,” she said.

“We’ve been aware of this management issue for a while,” he said. “The report is not a surprise.”

The PSC is employed by both the U.S. and Canada to assist in implementing the Pacific Salmon Treaty by convening meetings, publishing reports and relaying information between the countries.

PSC Executive Secretary John Field said “Canada so far has not raised this as a concern.”

“I’m assuming because they have not raised alarm or declared that they see Alaska as violating the treaty that they accept it as consistent with sustainable harvests under the salmon commission process,” he added.

Claire Teichman, press secretary for the federal fisheries minister, said “DFO officials are aware of the report and are reviewing it.”

“We know how important it is to protect and restore the Pacific salmon population,” she said.

Alaskan commercial fishing fleets just across the Canadian border logged over 3,000 boat-days and harvested almost 800,000 sockeye last summer, “most of which were of Canadian origin,” read a press release from the SkeenaWild Conservation Trust.

“Canadian fishers and taxpayers are making incredible sacrifices to protect and rebuild our salmon runs, while the Alaskan interception fishery continues unchecked,” said Hill. “It is irresponsible of both countries to continue to allow this.”

Doug Vincent-Lang, Alaska Department of Fish and Game (ADF&G) commissioner, criticized the report saying that it was an “unfair and biased attack on Alaska salmon fisheries.”

Management of southeast Alaska salmon fisheries by the ADF&G is consistent with the Pacific Salmon Treaty, he said.

“I was disappointed by what I consider to be a targeted attack on southeast Alaska salmon fisheries by these special interest groups,” Vincent-Lang said. “I take our obligations to fulfill treaty commitments seriously.”

Since the release of the report, the Tŝilhqot’in Nation has called on Canada to establish an independent review of the Pacific Salmon Treaty, citing the DFO has “failed” to meaningfully represent First Nation interests, including food, social and ceremonial fishing rights, at the international table.

“We need to immediately review how the Pacific Salmon Treaty is structured, and First Nations’ role at such an important international table,” said Joe Alphonse, Tŝilhqot’in National Government tribal chair. “This is what happens when others say they are looking after our interests.”

The Pacific Salmon Treaty has been in place since 1985 and was written to manage fish interceptions between Canada and the U.S. fairly and sustainably.

New agreements have been made every 10 years over the past three decades. The last one was made in 2019 and the treaty isn’t up for renewal until 2028.

The Pacific Salmon Treaty shouldn’t only focus on the number of fish that are allowed to be caught, but limit the catch size of females carrying eggs, said Masso.

“We hope that our restoration efforts lead to a system of abundance, which hopefully goes hand-in-hand with good management that will lead to abundance returning home,” he said.

Alaska could close the worst of its interception fisheries and reduce the impact on others by locating its fisheries closer to their own streams, the release from the SkeenaWild Conservation Trust suggested.

“We work tirelessly to rebuild habitat for wild Pacific salmon, but we need salmon to return in order for our restoration to be effective,” said Hutchinson. “The health of the entire watershed relies on a large number of salmon returning and bringing those marine-derived nutrients that are the fertilizer and what really generate the biodiversity and the health of these watersheds. We need the salmon to get back home.”

Focus in U.S.-Canada border tragedy to shift Monday as accused appears in court