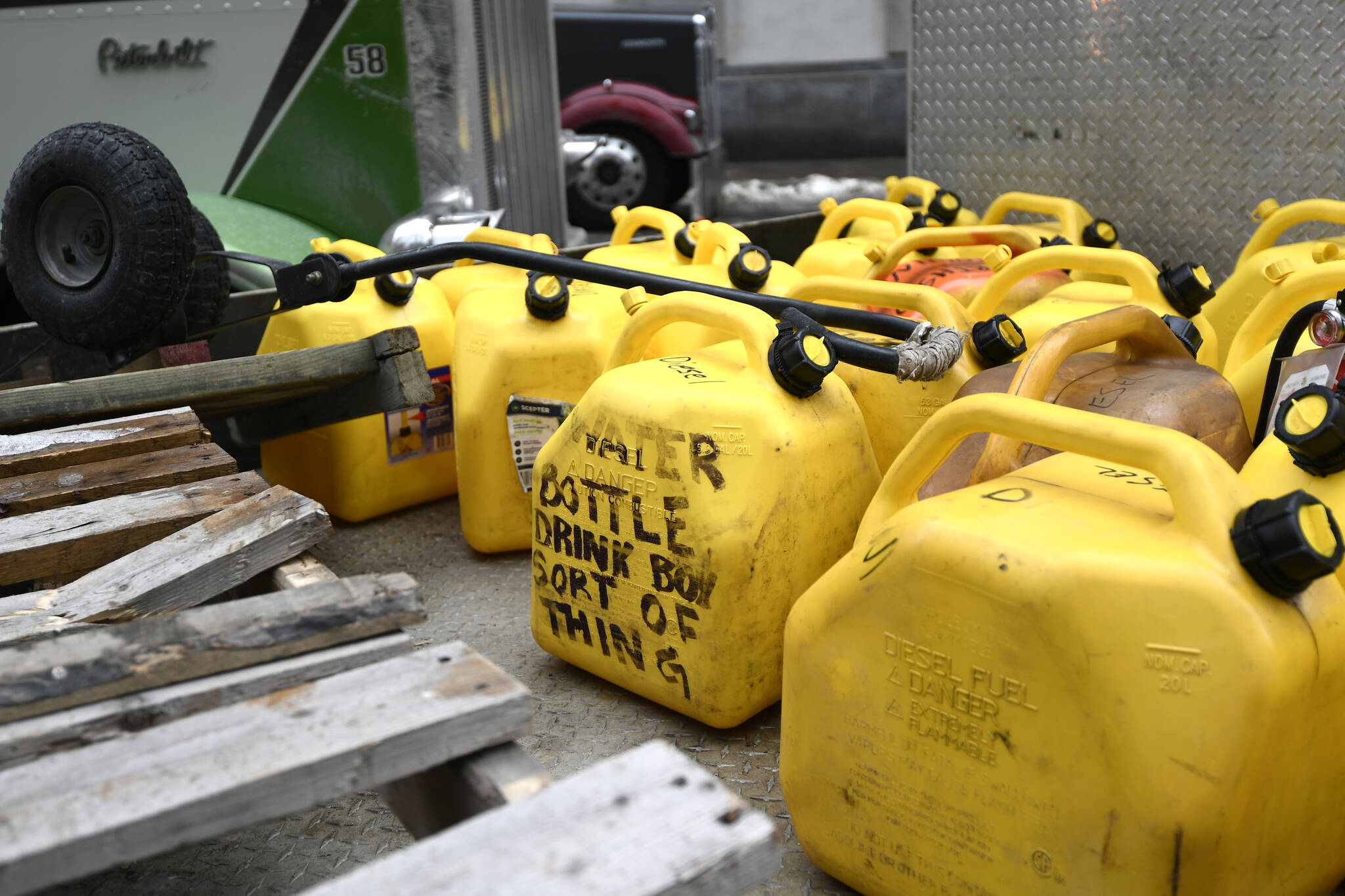 Fuel containers, including one claiming to be a water bottle, are seen in the back of a truck on Albert Street as a protest against COVID-19 restrictions that has been marked by gridlock and the sound of truck horns reaches its 14th day, in Ottawa, on Thursday, Feb. 10, 2022. THE CANADIAN PRESS/Justin Tang

Nearly two dozen vehicles tied to an ongoing protest have left Ottawa, local police say, while a convoy briefly disrupted traffic at the capital’s airport and calls grew for border blockades to end.

Ottawa police said Thursday that a dozen trucks left an area outside the downtown core after negotiations with protesters who have used the parking lot there as a staging and logistics ground. Ten more trucks left streets near Parliament Hill, and another vehicle was towed for obstructing traffic.

As part of the announcement, police reissued their call for remaining protesters — who are calling for an end to COVID-19 measures — to leave the national capital after immobilizing the core of the city for almost two weeks.

Demonstrators with large trucks have been warned by police that if they continue blocking streets they could be charged with mischief to property or have their vehicles and other property seized and possibly forfeited. Police also warned that charges or convictions might mean being barred from travelling to the United States.

But just as there was some movement toward ending the encampment of trucks, another group of vehicles caused traffic disruptions around Ottawa’s airport, although a city notice signalled the all-clear a few hours later.

Political patience with the protesters has run thin as calls grow for vehicles choking the flow of goods at border crossings to leave, including at Coutts, Alta., Emerson, Man., and the busy Windsor-Detroit Ambassador Bridge.

The Canadian Trucking Alliance said Thursday that the industry as a whole would pay a heavy price for the border actions, as it called on governments to come up with a plan to end the current blockades, and prevent them from happening again.

Michigan Gov. Gretchen Whitmer issued a written statement Thursday to call on federal, provincial and local authorities in Canada to “take all necessary and appropriate steps” to immediately end the blockades that threaten her state’s economy.

Transport Minister Omar Alghabra said the government was working with provinces and cities to do everything possible to reopen the flow of border traffic.

“These blockades are illegal and they need to end now,” he said as he walked on Parliament Hill, steps from where protesters are gathered.

In the House of Commons, interim Conservative leader Candice Bergen called on protesters to leave border crossings, cutting back her party’s support for some actions that she said are hurting the country’s economic rebound from COVID-19.

“Take down all of the blockades. Protest peacefully and legally, but it’s time to remove the barricades and the trucks for the sake of the economy,” Bergen said.

Protesters outside the door of Parliament were huddled in small groups just before Bergen spoke, while others lined up at a table with people giving away free coffee and collecting donations for truckers.

With a temporary injunction in place on protesters honking their truck horns, none could be heard early Thursday from the vehicles parked along Wellington Street in front of Parliament Hill.

The situation in Ottawa, which has spurred similar actions nationally and abroad, is expected to again dominate debate in the House of Commons as political fissures have formed inside the Liberal caucus and Official Opposition over the handling of the protests and public health measures.

The House of Commons foreign affairs committee is scheduled to meet today where the NDP will look for unanimous consent to invite U.S. Ambassador David Cohen to testify about American funding of the protest in Ottawa through online donations, which the New Democrats say is an attack on Canada’s democracy.