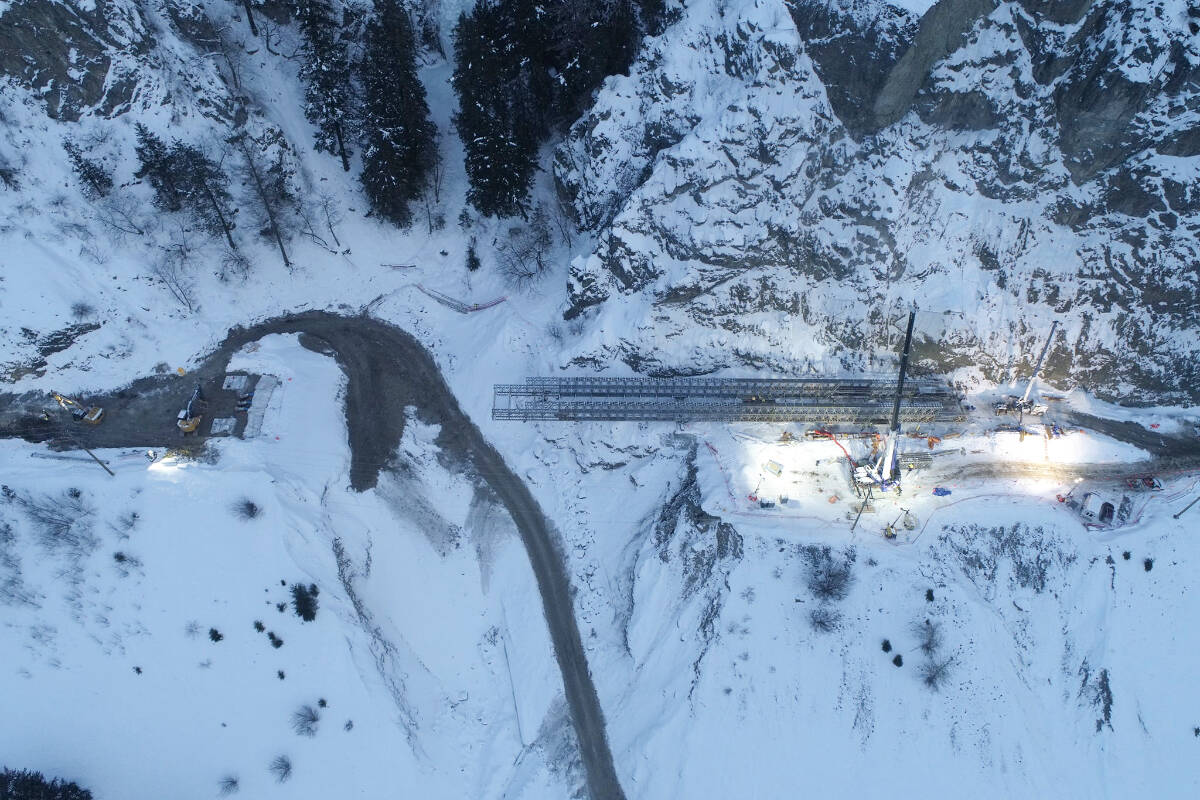 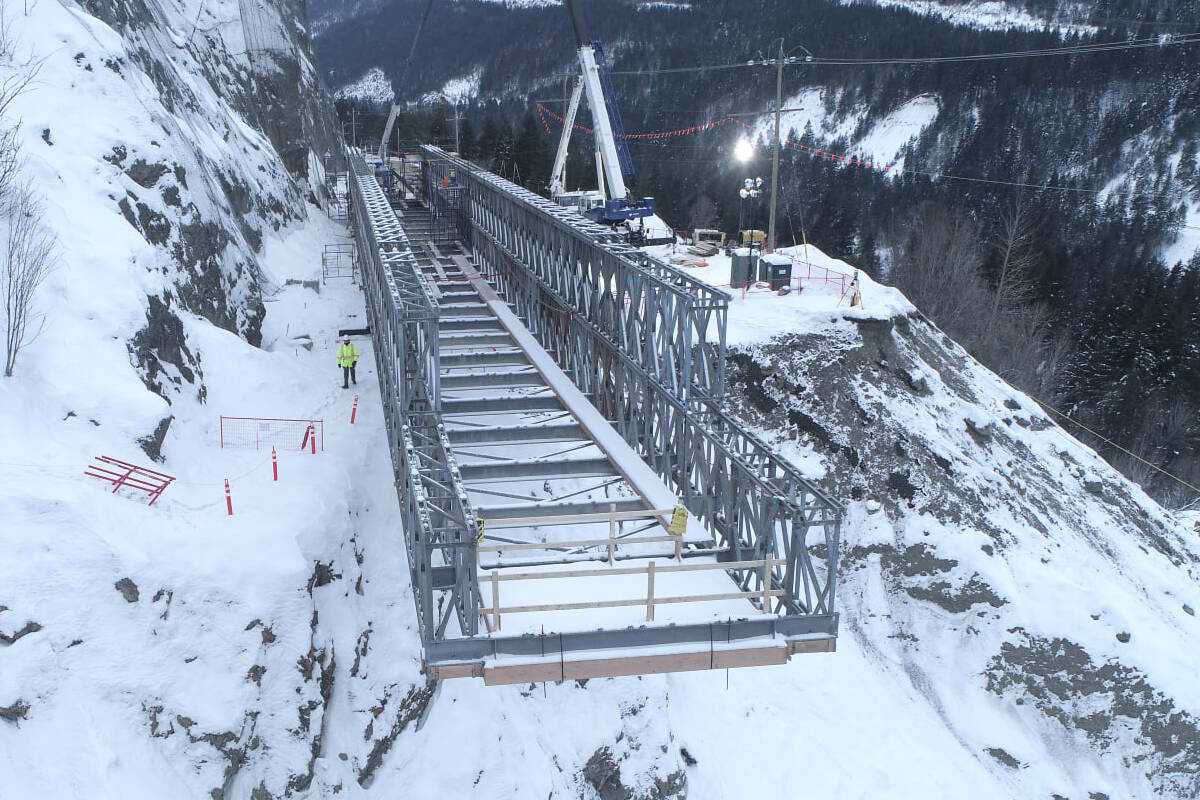 Looking south at the temporary bridge being installed on Highway 1 at Jackass Mountain. (Photo credit: MOTI) 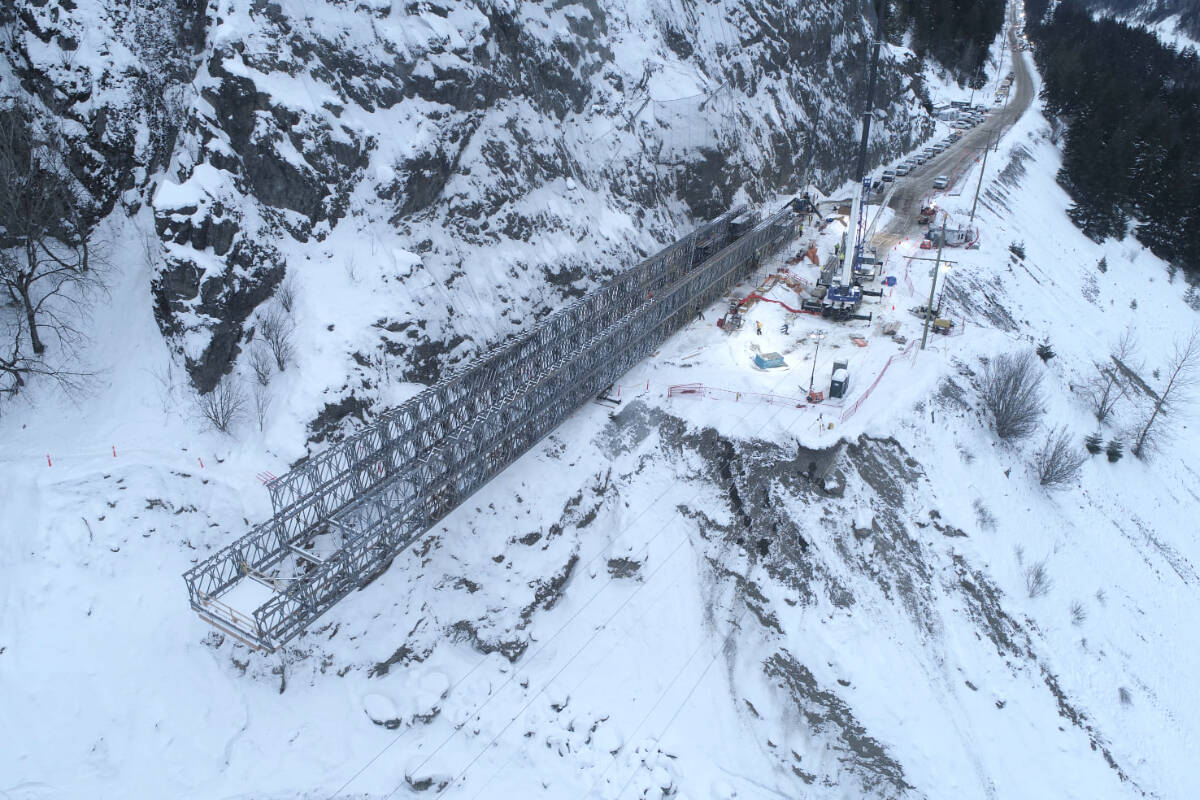 Another view looking south at work being done on Highway 1 at Jackass Mountain, where a temporary Atcow bridge is being installed. (Photo credit: MOTI) 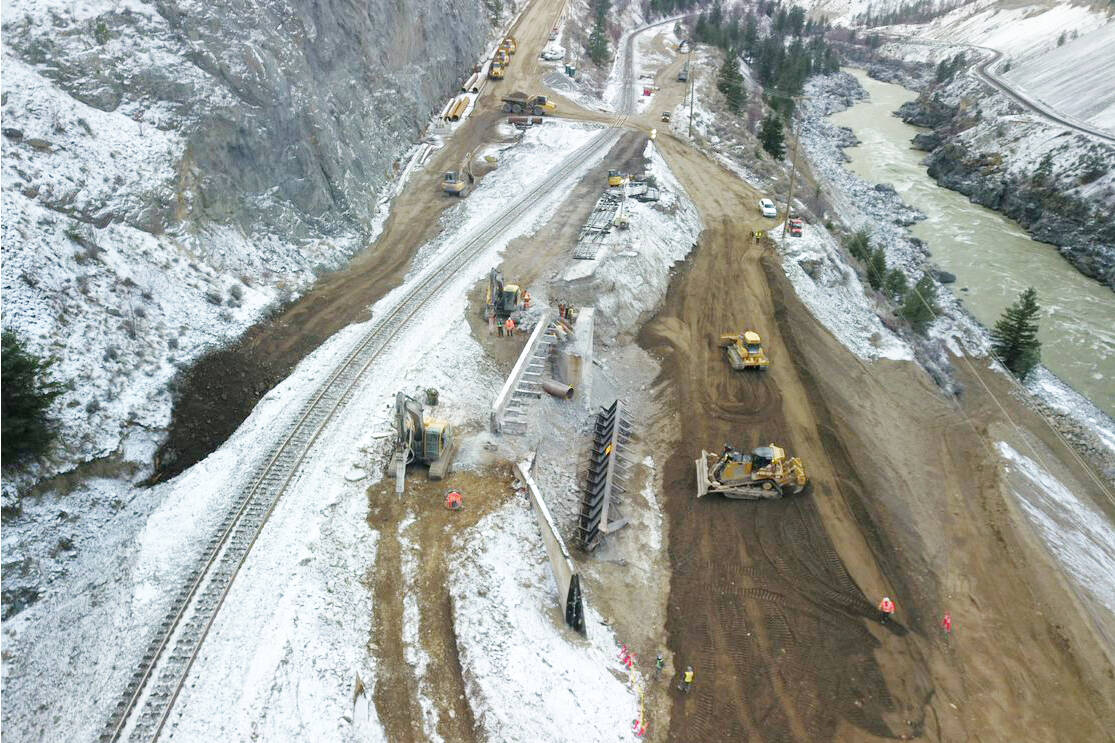 Work at Tank Hill on Highway 1 north of Lytton on Dec. 7, 2021. The highway at the site will now feature a temporary at-grade level crossing of the CP mainline. (Photo credit: MOTI) 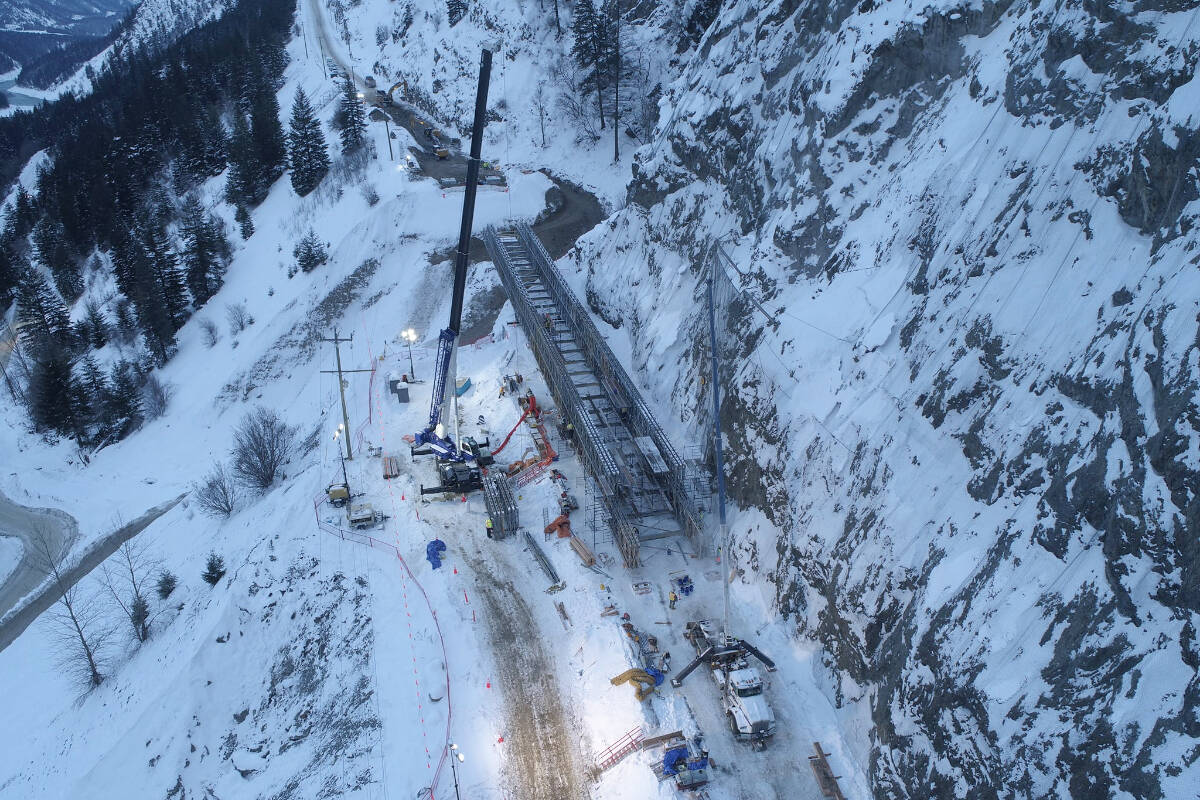 Looking north on Highway 1 at the bridge being installed at Jackass Mountain. (Photo credit: MOTI)

Highway 1 through the Fraser Canyon is still scheduled to reopen in mid-January, according to the Ministry of Transportation and Infrastructure (MOTI).

The highway has been closed between Boothroyd (north of Boston Bar) and Spences Bridge since mid-November, 2021, when an atmospheric river over Southern B.C. brought massive amounts of rain. Combined with warmer-than-usual temperatures that melted snow in the upper levels, the flooding caused devastating damage to Highway 1 through the canyon, and to the CP and CN main lines.

In all, nearly two dozen spots along the highway were damaged, from rockslides to washouts that severely impacted infrastructure, most notably at Tank Hill north of Lytton and at Jackass Mountain north of Boston Bar. There was also severe damage to the Nicomen Bridge and at Gladwin.

Crews have been working at all impacted sites since November. Black Press Media reached out to MOTI late last week for an update on when the highway would reopen and what drivers could expect to see once it does.

“There is not a specific date for the reopening of Highway 1 between Boston Bar to Spences Bridge, but mid-January is still the expected reopening time,” was the reply from MOTI. “At Jackass Mountain, work is underway on a large section of three-lane road (there is a climbing lane at this location) that was completely wiped out from a landslide. A single-lane temporary bridge is being installed to restore traffic flow.”

The bridge in question is a 260-foot-long Acrow bridge, which is being installed in sections. Stabilization work has been carried out on the north slope, and crews have also been clearing snow and excavating.

At Tank Hill a temporary detour, including an at-grade rail crossing, is being built where a landslide sheared off about 70 metres of a two-lane road and damaged the railway line (CP) above it. “At Tank Hill, drivers will now have to cross over the rail at a level crossing. There will be traffic control personnel and/or advanced warning signs and traffic lights to stop traffic in advance of the level crossing, as well as gates and warning lights at the level crossing.”

At the Nicomen site, there will be a temporary single-lane bridge upstream of the existing highway bridge. Riprap has been put in place for the southern bridge abutment, and lock blocks are being installed to support the bridge. The existing highway bridge is undergoing rehabilitation, and there is no timeline for when this repair will be completed. The Gladwin site has had new culverts installed and riprap placed in the area, and will be restored to two lanes of paved highway.

Once Highway 1 reopens through the canyon, there will be some single-lane sections, the at-grade rail crossing, and slower speeds to accommodate the temporary works and ongoing construction. The ministry is still reviewing what highway restrictions may be considered for the section, if any.

MOTI is publishing regular updates detailing the work and progress on Highway 1 through the canyon and Highway 8 east of Spences Bridge. Links to all the reports to date can be found on the Thompson-Nicola Regional District website at https://bit.ly/3HvAmwq.