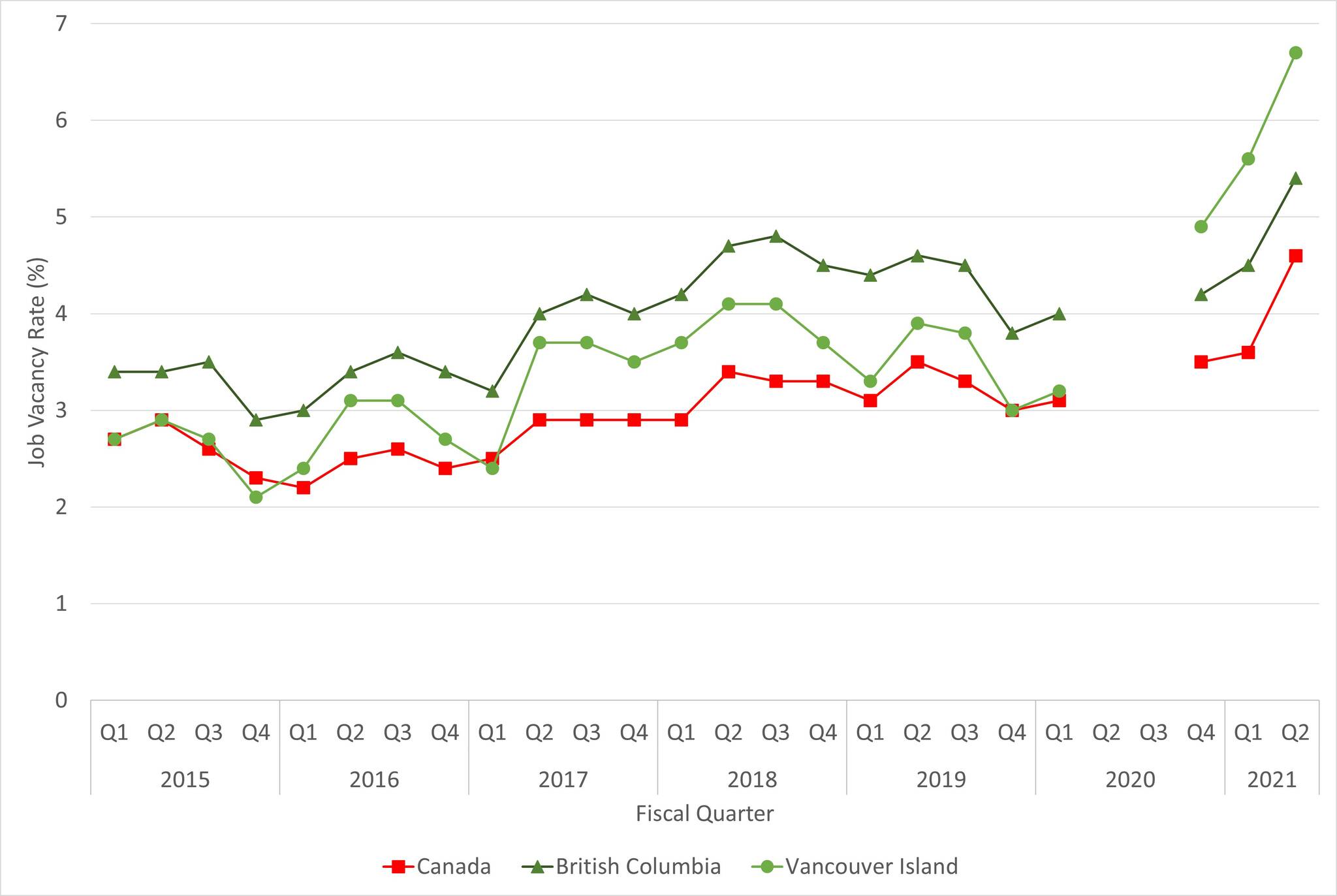 A graph depicting job vacancy rate from 2015 through to the second quarter of 2021 for Canada (red), British Columbia (dark green) and Vancouver Island (light green). Data was not collected for Q2 and Q3 of 2020 due to the pandemic, hence the gap on the graph. Source: Statistics Canada 14-10-0325-01.

Vancouver Island is being affected by a record high number of job vacancies, caused by compounding impacts of the pandemic.

According to data recently published by Statistics Canada, there were a record high 731,900 vacancy jobs nationally in the second quarter of 2021. This number includes 122,260 vacancies in British Columbia, of which 22,355 were on Vancouver Island.

While the market has since improved — Canada gained 94,000 jobs in July and 90,000 in August, seasonally adjusted — many businesses continue to be short staffed.

This situation is the result of a “perfect storm” caused by three trends driven by the COVID-19 pandemic, explained Mary Ruth Snyder, executive director of the Campbell River and District Chamber of Commerce.

“At the beginning of the pandemic, there was an immediate closure of a number of businesses such as restaurants, retail and tourism, right across Canada — and a lot of those people went on to the government support,” she said.

This caused three trends in the job market which together produced today’s job vacancies.

The first affected those towards the end of their careers; six months or so into the pandemic, those who were a few years before their scheduled retirement decided to leave their jobs early.

“The pandemic instigated a quicker departure because it highlighted the importance of family and friends and work-life balance,” said Snyder.

The second trend was that once laid-off, some workers reevaluated their career and decided it was time for change.

“A number of people, who found themselves laid off indefinitely, decided they were in a job that they didn’t love and that they weren’t passionate about, so they left that job altogether,” she said.

The third impact of shutdowns is people turned to the Canada Emergency Response Benefit (CERB) and have not yet turned to employment, she said. This federal program offers up to $2,000 per month and is slated to continue until Oct. 23.

“These three situations created the perfect storm, and it happened right across Canada,” said Snyder.

On Vancouver Island, and especially Campbell River, these labour trends were compounded by increased demand in the housing market. As more people moved to the Island, rental and housing prices jumped, thereby pricing some potential workers out of the market.

“You’ve got all these people that retired across Canada, and many are moving to Campbell River, so that has exacerbated the additional problem we have with housing and the demand for housing on Vancouver Island,” she said.

The conclusion of CERB at the end of October will help the situation, but Snyder estimates those choosing to return to the job market represent only a third of who were lost.

One way to help the situation is to streamline certification processes and enhance support for language programs for newcomers, but this will take time. But despite these possibilities, there are no easy, short-term fixes to the current job vacancy problem, she said.

Williams Lake Deni House closed to visitors due to COVID-19 exposure, not an outbreak