Throngs of tourists gleefully watched the legendary Old Faithful geyser shoot towering bursts of steaming water while others got stuck in “bison jams” on picturesque valley roads as visitors returned Wednesday for the partial reopening of Yellowstone National Park after destructive floods.

Park managers raised the gates at three of Yellowstone’s five entrances for the first time since June 13, when 10,000 visitors were ordered out after rivers across northern Wyoming and southern Montana surged over their banks following a torrent of rainfall that accelerated the spring snowmelt. The cost and scope of the damage is still being assessed, Yellowstone Superintendent Cam Sholly said Wednesday.

Empty roads and parking lots quickly grew busier by mid-morning as about 5,000 vehicles entered the park after getting through long lines that stretched for several miles (kilometers) at one gate in the early morning. The backups were gone by early afternoon, though, and visitation numbers were less than a normal summer day that draws about 10,000 vehicles, park officials said in a news release.

Paul Nithyanand of Chennai, India, gathered around Old Faithful along with 1,500 people in the afternoon to see it erupt. Nithyanand was touring the western U.S with his brother and had already seen the Grand Canyon and Las Vegas, but said nothing on his trip compared with Old Faithful.

“It’s awesome,” said Nithyanand, who was so impressed he waited around 80 minutes to it erupt again. “I’ve been seeing it in movies and on YouTube but seeing it live is amazing.”

Lonnie and Graham Macmillan of Vancouver, Canada, were among those at a so-called “bison jam” where a group of the burly animals crossed the road. The bison sighting capped a successful morning in which they’d already seen two moose and numerous deer.

They showed up at the park last week, only to get turned away as it was under evacuation. They diverted to Mount Rushmore in South Dakota for a few days and then to Wyoming’s Big Horn mountains before returning to Yellowstone as soon as the chance arose.

“The whole purpose of our trip was to come here,” Lonnie Macmillan said. “We weren’t going to go home until we got here.”

The record floods reshaped the park’s rivers and canyons, wiped out numerous roads and left some areas famous for their wildlife viewing inaccessible, possibly for months to come. It hit just as a summer tourist season that draws millions of visitors was ramping up as the park celebrated its 150th anniversary a year after it tallied a record 4.9 million visits.

Some of the premier attractions at America’s first national park were again viewable, including Old Faithful, which shoots bursts of steaming water almost like clockwork more than a dozen times a day.

But the bears, wolves and bison that roam the wild Lamar Valley and the thermal features around Mammoth Hot Springs will remain out of reach. The wildlife-rich northern half of the park will be shuttered until at least early July, and key routes into the park remain severed near the Montana tourist towns of Gardiner, Red Lodge and Cooke City.

Muris Demirovic, 43, of Miami and his 70-year-old mother arrived at the east entrance at about 5:30 a.m. and were second in a line of dozens of cars. He and his mother, who is from Bosnia, were on a cross country trip visiting national parks and Yellowstone was at the top of their list.

However, when they arrived, it was closed due to flooding. Demirovic and his mother toured Cody, Wyoming, went to a rodeo, walked some trails and visited a museum. They had planned to leave the Yellowstone area on Monday, but stayed when they learned the park would reopen.

“This is a once-in-a-lifetime trip for me and my mom, so I had to make sure she sees this,” he said.

To keep visitor numbers down while repairs continue, park managers are using a system that with few exceptions only allows cars with even-numbered last digits on their license plates to enter on even days, while vehicles with odd-numbered last numbers can come on odd days.

Park rangers had to turn away fewer than 1% of the people lined up due to license plate issues, and they were turning them away before they got in long lines to enter the park, Sholly said.

If traffic along the park’s 400 miles (644 kilometers) of roads becomes unmanageable, Sholly said officials could switch to a reservation system.

The reopening comes as officials in Yellowstone are still tallying the extent of the damage. Based on other national park disasters, it could take years and carry a steep price tag to rebuild. It’s an environmentally sensitive landscape with a huge underground plumbing system that feeds into the park’s geysers, hot springs and other thermal features. Construction season only runs from the spring thaw until the first snowfall, a narrow window that means some roads could receive only temporary fixes this year.

That’s turned some Montana communities into dead ends instead of being gateways to Yellowstone, a blow to their tourism-dependent economies. They’re also still struggling to clean up damage to several hundred homes and businesses that were swamped by flooding.

Sholly said he initially thought damage was worse than it actually is, but stressed that it is still bad in some areas of the park. That includes what he called “catastrophic” damage to one road near Gardiner, Montana, that won’t be able to be rebuilt in the same canyon.

Montana Gov. Greg Gianforte, who r eceived criticism last week for not disclosing he was out of the country until two days after the flooding, was not at the park for Wednesday’s reopening. Spokesperson Brooke Stroyke said Gianforte was scheduled to meet with Cabinet members and be briefed on flood response and recovery.

Tiffany Jahn from Kenosha, Wisconsin, who was with her husband and daughter in the line at the south entrance in Wyoming, said she was excited to see anything that was still open and especially hoping to glimpse the park’s wildlife.

“We were actually coming last week and we were getting messages … saying ‘Don’t come, don’t come,’” she said. “But we were already out here so we kind of just altered our plans and made it work. ” 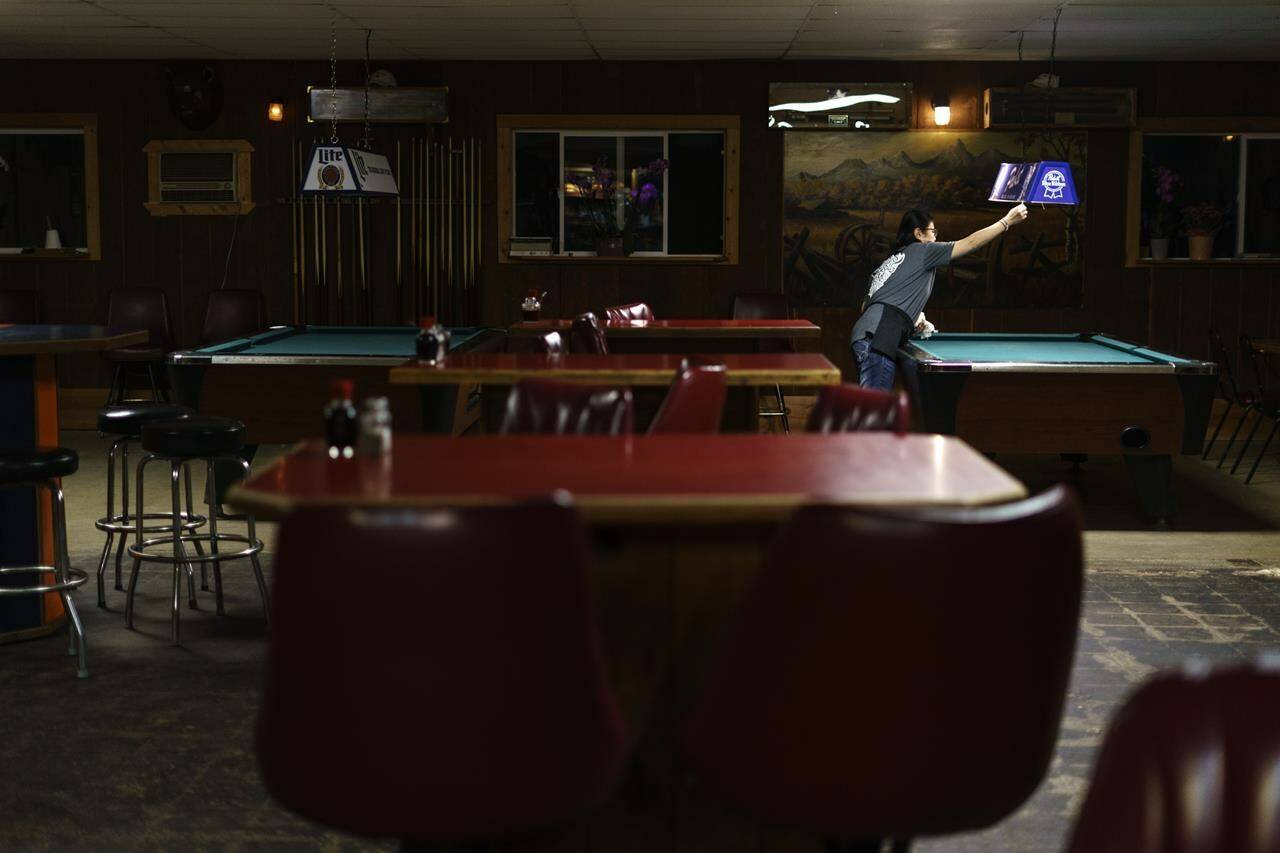 Yokie Johnson turns off a lamp at the end of the night at MontAsia, the restaurant she runs with her husband in Fishtail, Mont., Thursday, June 16, 2022. The main road into Fishtail was washed away by the recent floodwaters and Johnson worries the lack of traffic will hurt their business. For Johnson, the business was a dream come true. She had beat cancer a few years ago, but it returned late last year in a more aggressive form and has spread across her body. “I’m not sure how much time I have left, so the time I have left I want to be with my family, work with them every day, see them every day,” she said. (AP Photo/David Goldman) 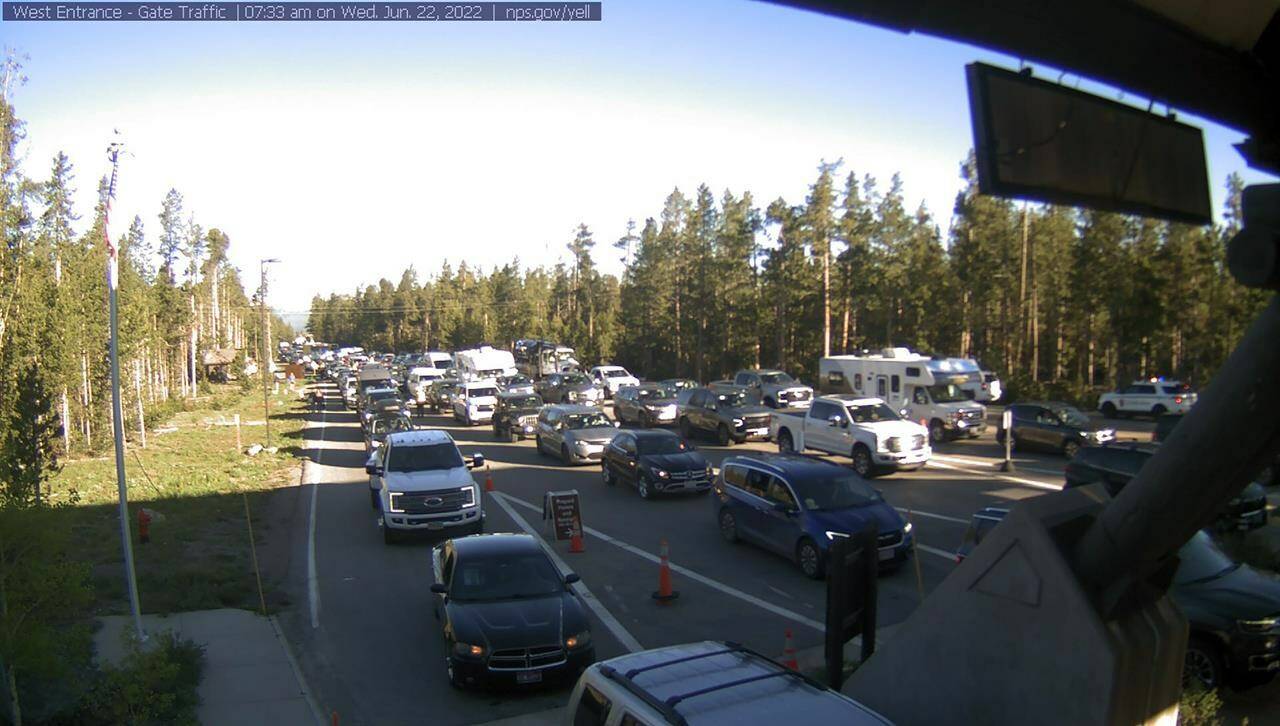