Like the sunlight reflecting on Shuswap Lake on a calm day, there are many angles to the issue of dredging in Salmon Arm Bay.

Kim Karampelas, owner of Sea-Dog Rentals at the Salmon Arm Marina, as well as boaters who have spoken to her, would like to see the City of Salmon Arm dredge the channel leading from the body of the lake to the entrance of the marina.

On the day of the interview, Sept. 1, she is shutting down her business because the water in the channel is too shallow for most boats. The water in the marina is a good depth, but she said there’s no way to get through to the lake without potentially scraping bottom, damaging a propeller or other hazards.

She said the area was dredged more than 30 years ago and the diggings were deposited to the northeast to create Christmas Island. Historian Deborah Chapman confirms dredging of the channel took place in 1989, and also in 1961. (Christmas Island was named after Eric Christmas who was instrumental in preserving the foreshore and developing the bird sanctuary)

“Now as you go on throughout the years, it just gets worse and worse,” Karampelas said of the lake level in the channel.

She’s been told it could cost two or three million dollars to dredge the channel.

“So what, we’re not going to have a bay for the boating community of Salmon Arm? It seems like everybody is really frustrated. They call me. I have 50 moorage customers. It’s really tricky to get in and out.”

She said boaters have also asked what the sense is in building new docks if there will be no dredging.

As if to emphasize her point, the captain of a houseboat heading down Shuswap Lake towards the Salmon Arm marina tells two young men on a Sea-Doo who ride out to meet him that his truck is in Salmon Arm. He’s bringing his houseboat to the marina and will go pick up his truck.

The young men tell him the water in the channel is too shallow. He won’t make it into the marina. They suggest he see if it’s possible to moor in Canoe and get a ride in from there.

Karampelas says she has run Sea-Dog Rentals in the marina for 21 years and has never had to shut down this early. Her season usually runs to about Sept. 30, she said. September is often a prime vacation period and not only does the channel level curtail boaters, it affects other businesses because boaters can’t purchase gas, park and stroll around town.

Tim Panasiuk with Gibbons Motor Toys sees two issues. One is dredging, the other is the boat launch which he says isn’t long enough for the shallow water. Because of the depth, boaters have to back farther down the ramp, so they risk having their trailers go off the end, which is about a two-foot drop, he said.

Estimates vary on the length of the area that would need dredging. While Karampelas suggested 100 or 200 feet, Panasiuk estimated a minimum of 1,000.

Panasiuk said he expects a lot of studies would have to be done, and, adding that he’s not an expert, if dredging was permitted, some type of retaining wall might have to be built as the silt appears to be coming from the Salmon River side.

“I think it’s possible, but I think it would be a heck of a challenge. At the same token, we build the second largest wharf in Canada; it’s one of the pillars of Salmon Arm. I think something should be done about it.” 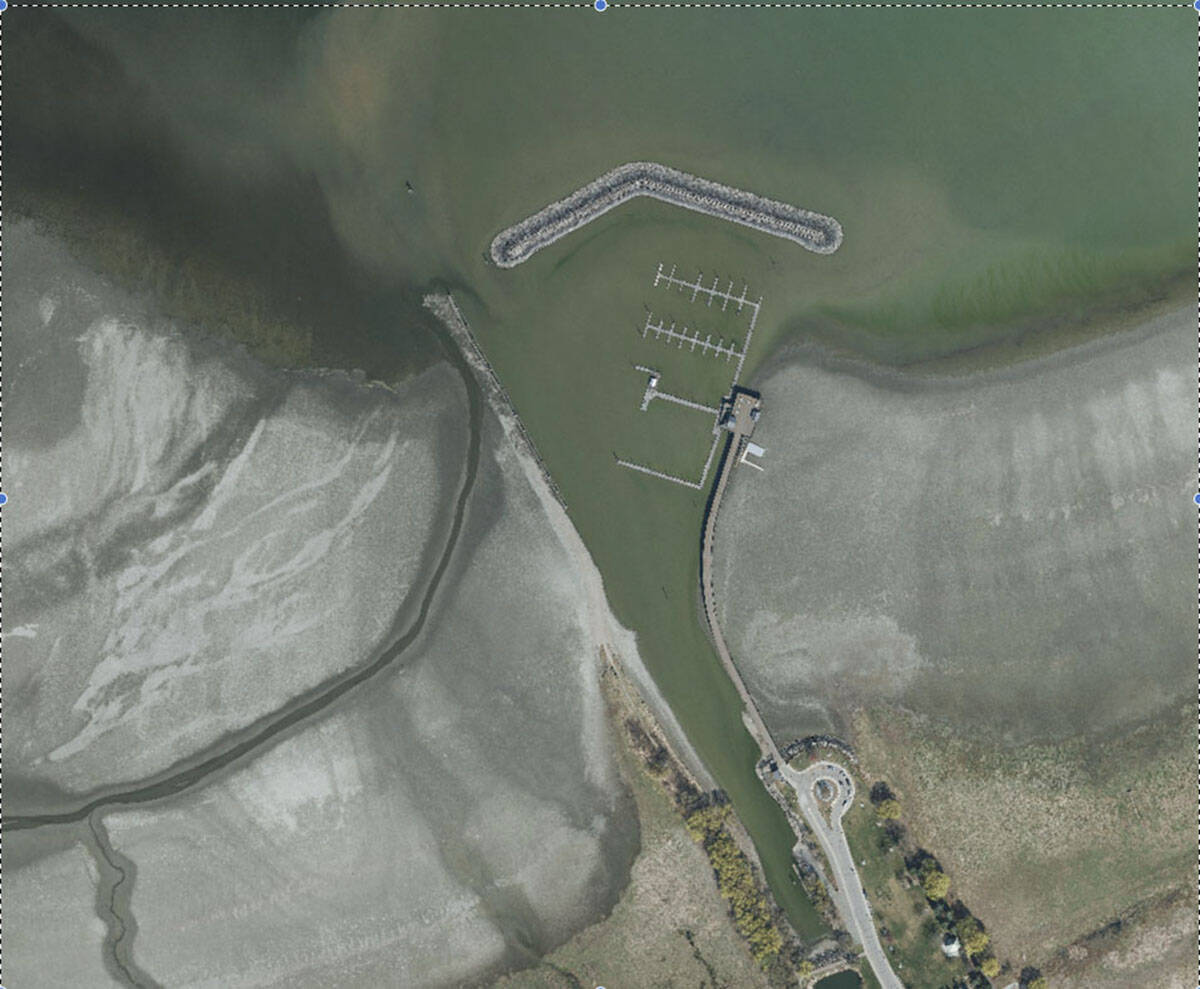 This aerial photo of the marina in Shuswap Lake’s Salmon Arm Bay and the channel area outside of the entrance to the marina shows a lighter area of varying shades that appears to have a build-up of silt coming from the Salmon River. (City of Salmon Arm image)

Regarding impact on business, Panasiuk said it’s terrible. The only option is for boaters is to go to Sicamous in September and October.

“It doesn’t attract anyone to the Salmon Arm area, that’s for sure.”

“In the next five to 10 years you won’t go boating from Salmon Arm,” he said, suggesting Herald Park and Sicamous will be the only options, because Salmon Arm is already inaccessible by the end of August.

He said dredging would be a council decision that would require provincial and federal government approvals. He thinks a cost benefit analysis should be done to determine if dredging the channel would be worth the expense to the taxpayers of Salmon Arm. The cost of the project was estimated at $1 million in 2003 and would be significantly more than that now, he said.

“The real issue here is that the lake levels in the Salmon Arm Bay can see up to four-plus metres (14 feet) of elevation changes in the water levels,” he said, depending on the season – freshet, snowpack, rainfall, etcetera.

“This situation is no different than most marinas on Shuswap Lake and we do not have a relatively consistent lake level like in Kelowna on Okanagan Lake.”

He said dredging would likely add another week in early spring and late September, but the marina is in the upper part of the bay and a part of the Salmon River delta which is very shallow.

“By mid-September the lake water in the wharf and marina area has completely receded and it turns into a mud flat.”

Mayor Alan Harrison said council is currently working on a renewed strategic plan and one of the items to be discussed will be dredging the channel. He said cost is an important factor.

“Even if we were able to get the go ahead from the Ministries of Environment and Fisheries and Oceans, the material removed would have to be trucked off site, which would add considerable cost. Environmental and Fishery regulations have changed substantially since the ’80s. Given the environmental values of Salmon Arm Bay, I believe it would be very difficult to obtain permission to dredge the channel.”

Regarding possible signage to warn boaters of shallow water, Harrison said one of the challenges for local governments is having no jurisdiction over water bodies.

“So, when citizens bring forward concerns like noisy cigar boats or shallow boat channels, the provincial and federal ministries have jurisdiction.”

Read more: Time has come for new docks at the Salmon Arm wharf 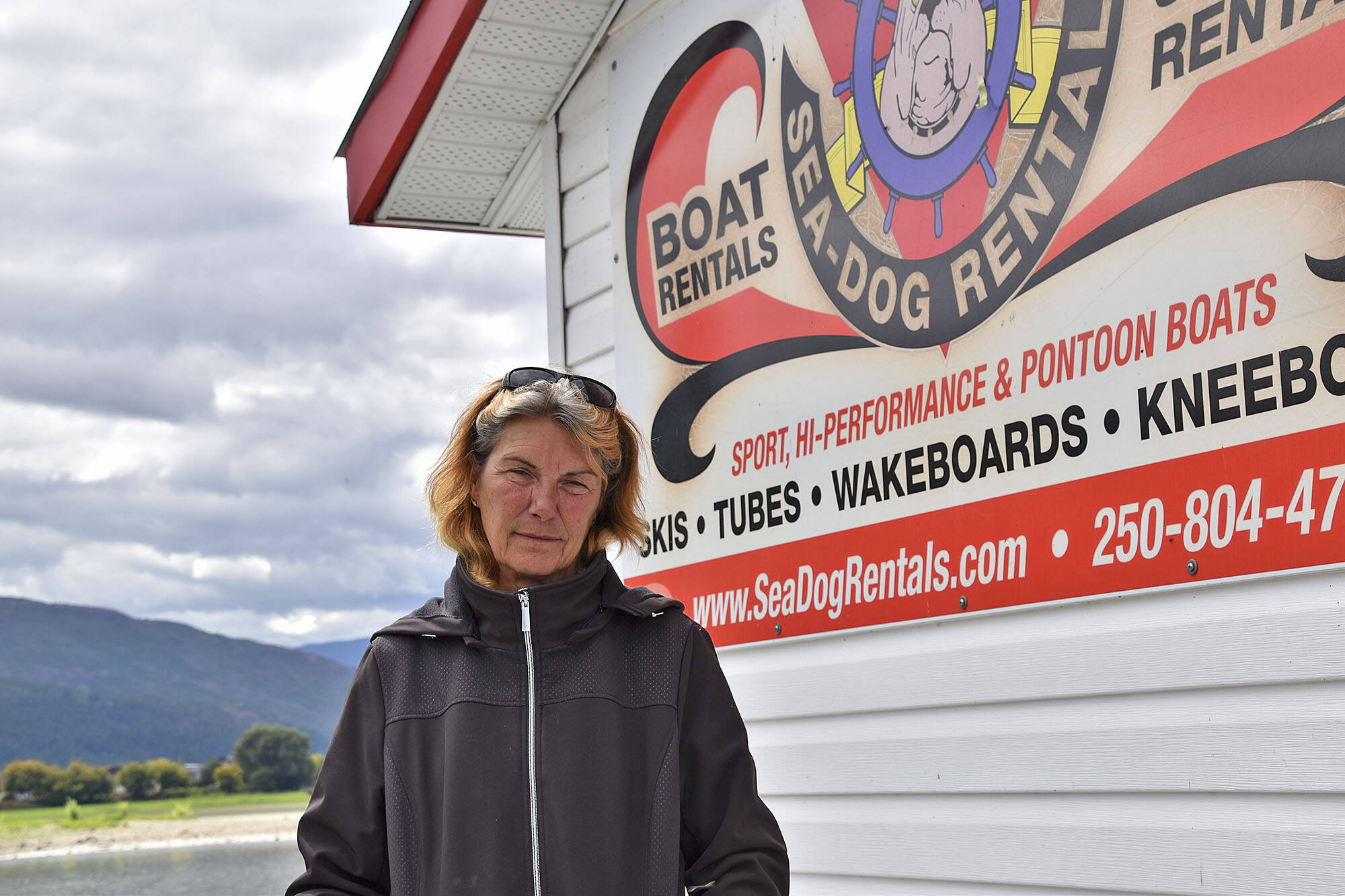 Kim Karampelas, owner of Sea-Dog Rentals, wants to see the City of Salmon Arm dredge the channel leading into the marina in Salmon Arm Bay because she said it’s getting shallower, this year making the marina unusable for many boats past Aug. 31. (Martha Wickett - Salmon Arm Observer) 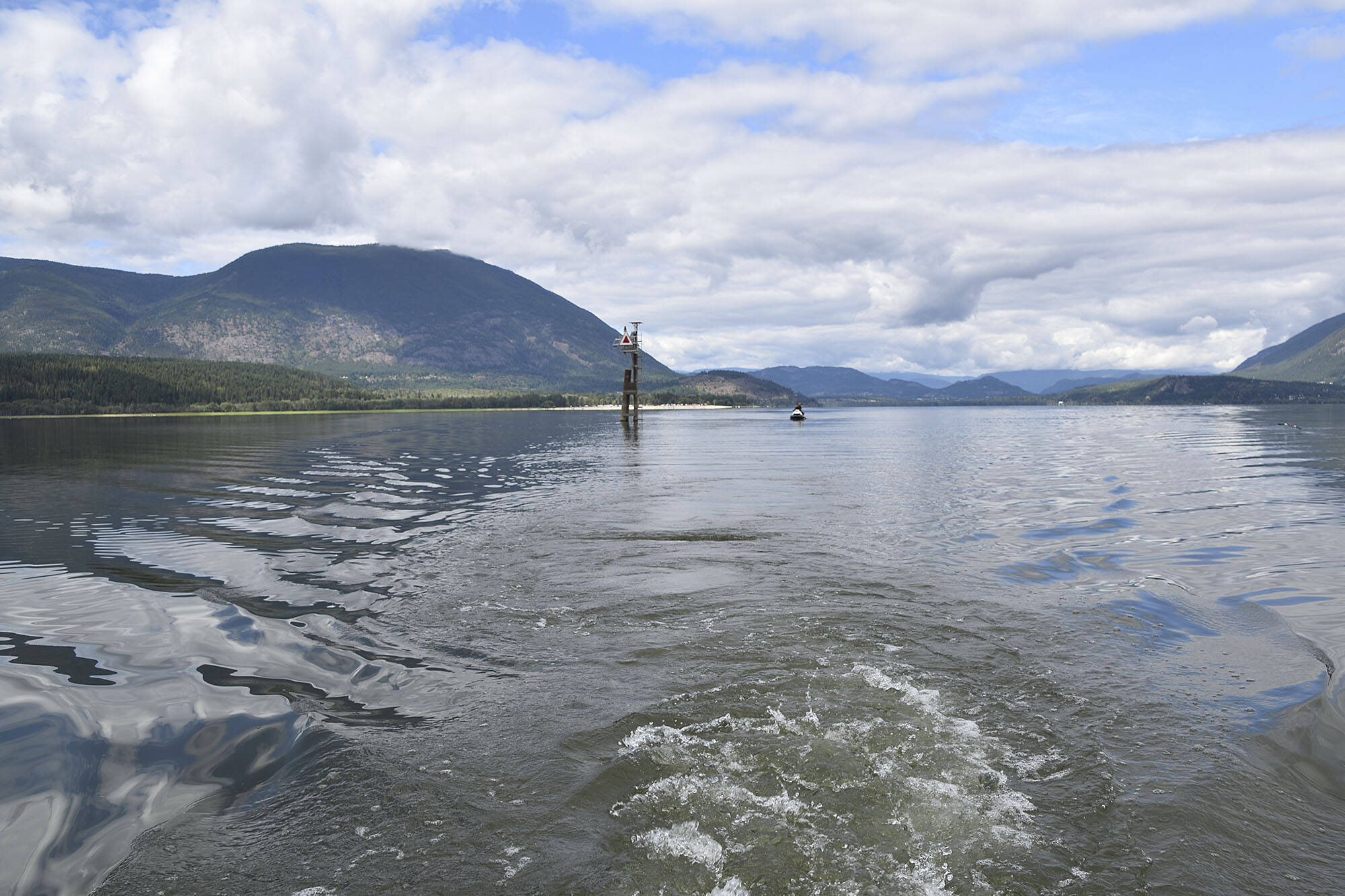 The area that would likely require dredging goes beyond the pilings in Shuswap Lake standing well beyond the entrance to the marina. (Martha Wickett - Salmon Arm Observer) 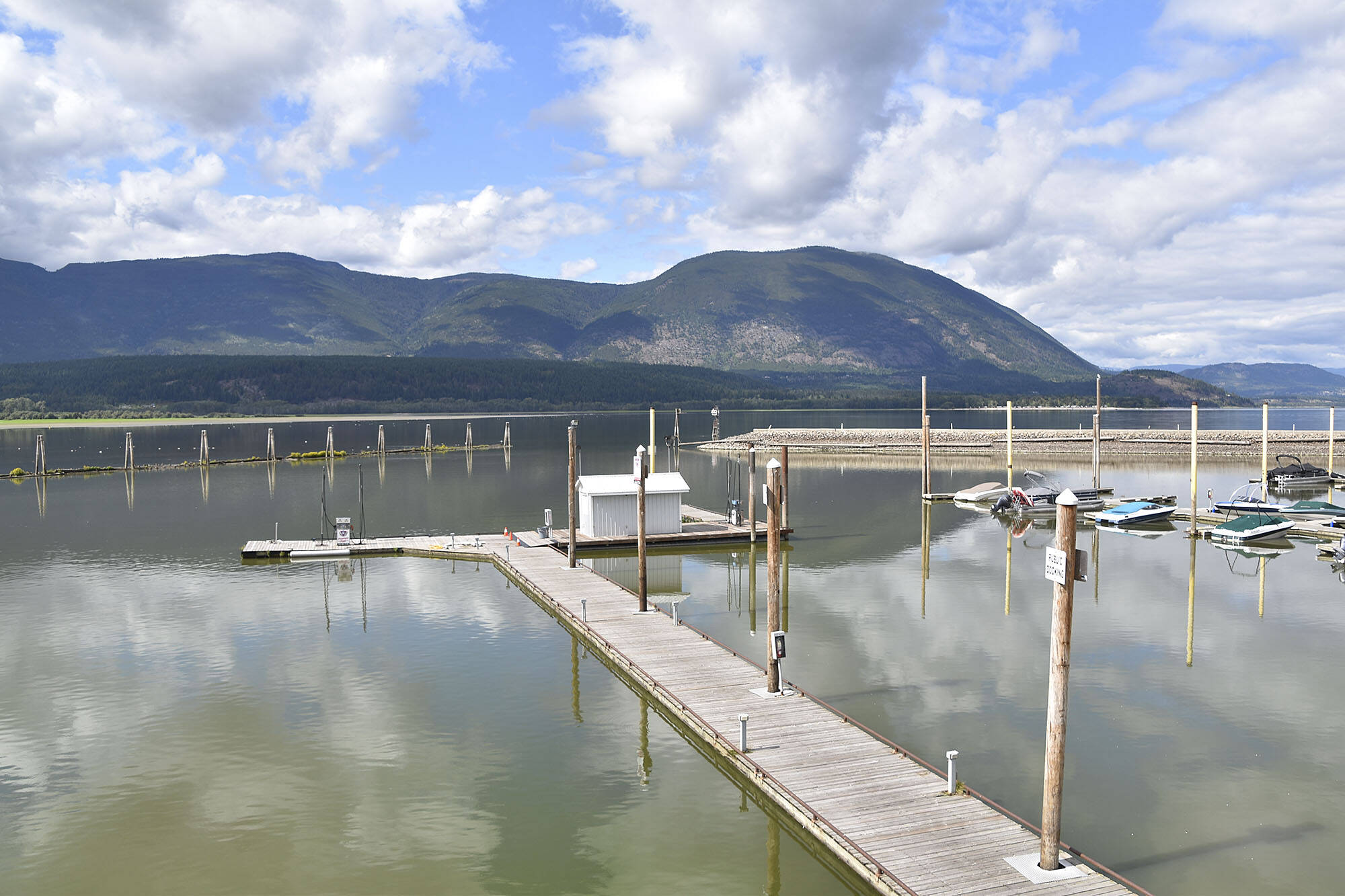 While the Salmon Arm Marina in Shuswap Lake’s Salmon Arm Bay is deep enough to accommodate boats in September when the water level can be low, the channel outside the entrance to the marina is more shallow and, in 2021, reports were that it was not accessible to many boats beyond Aug.31. (Martha Wickett - Salmon Arm Observer) 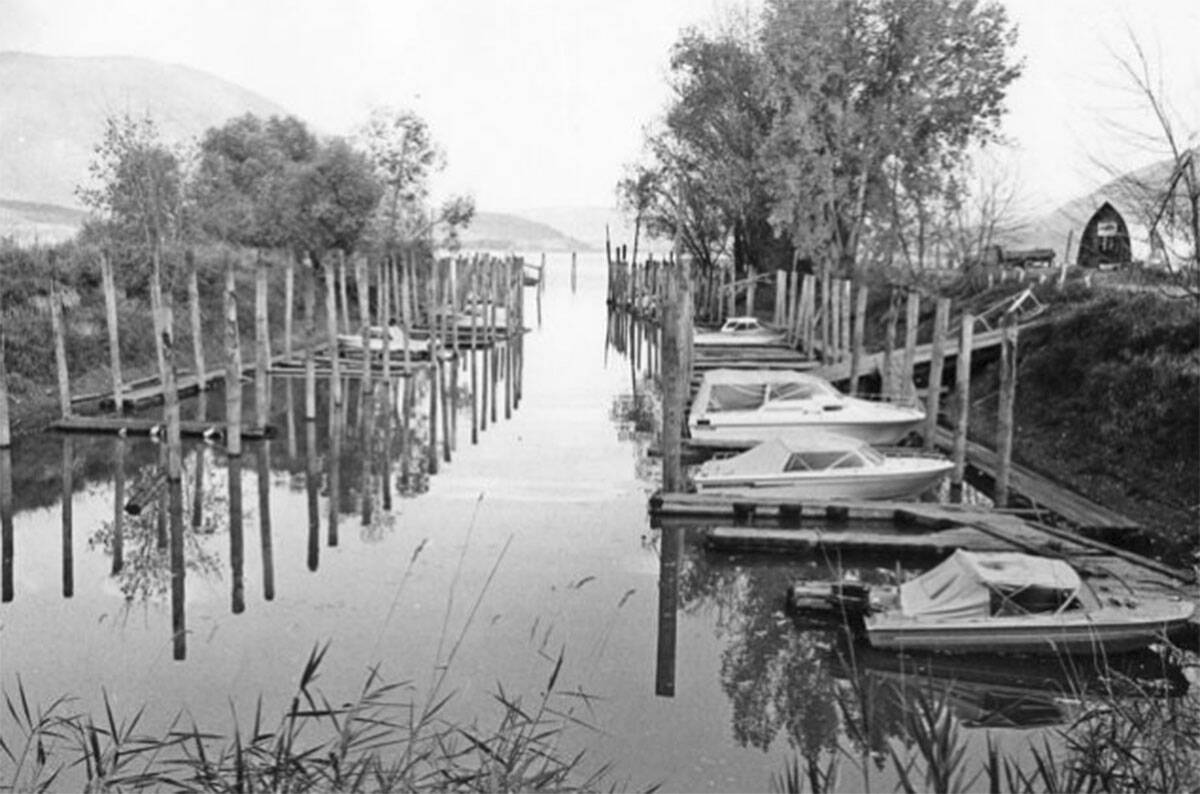 Vessels owned by members of the Salmon Arm Boat Club have safe harbour in the dredged city marina in October 1975. The channel leading into the marina was dredged in 1989. (Image from the Denis Marshall Collection and courtesy the Salmon Arm Museum at R.J. Haney Heritage Village.)