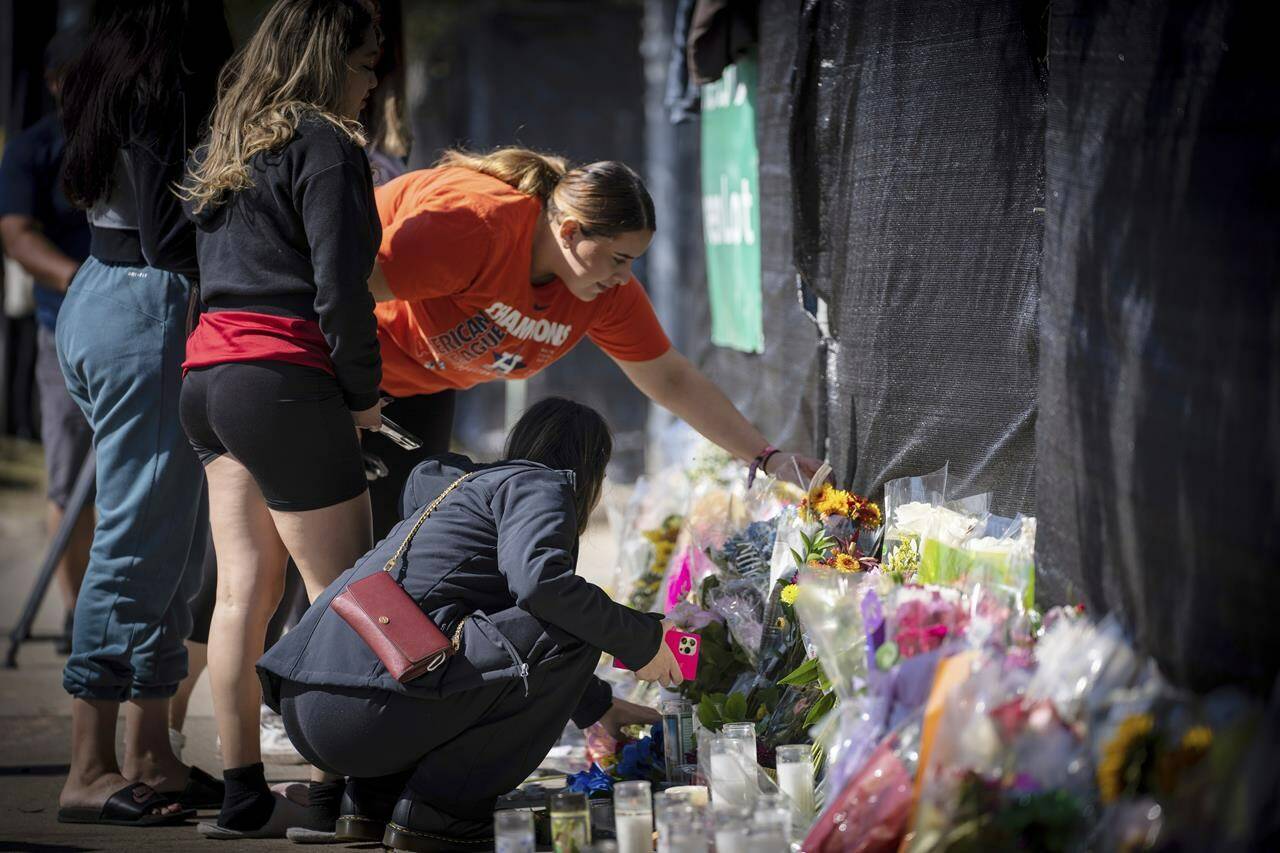 Stacey Sarmiento places flowers at a memorial in Houston on Sunday, Nov. 7, 2021 in memory of her friend, Rudy Pena, who died in a crush of people at the Astroworld music festival on Friday. (AP Photo/Robert Bumsted) 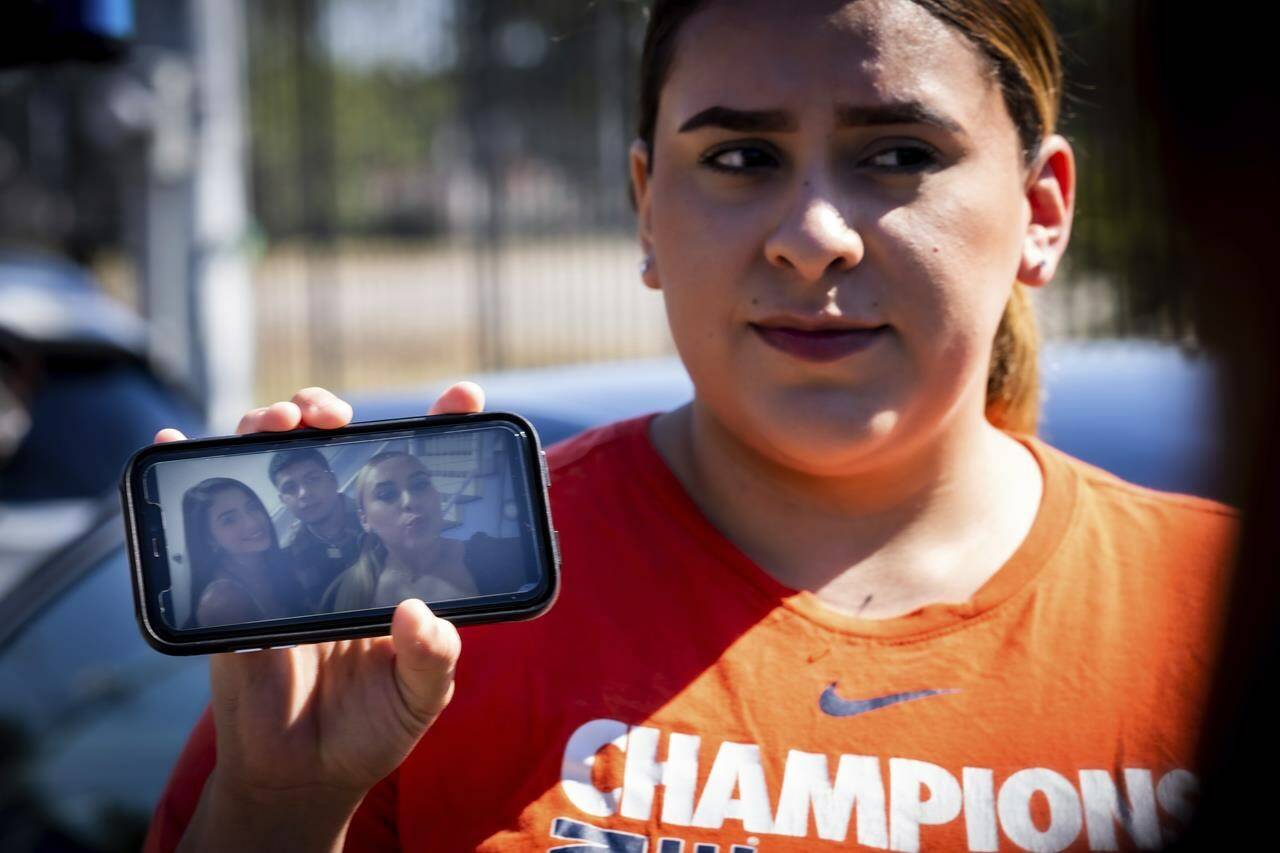 Stacey Sarmiento holds a photo up of her posing with her friend, Rudy Pena, who died in a crush of people at the Astroworld music festival in Houston. (AP Photo/Robert Bumsted) 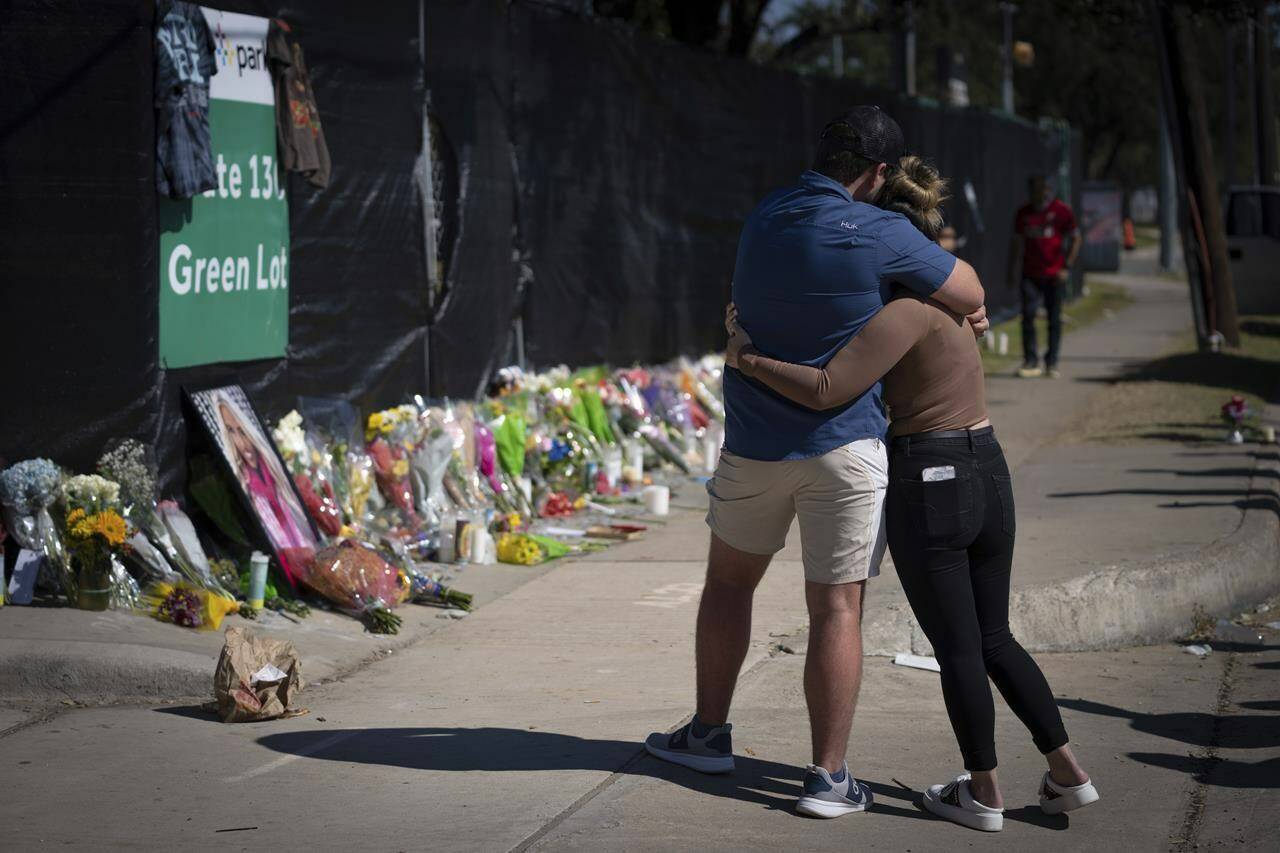 Two people who knew an unidentified victim of a fatal incident at the Houston Astroworld concert embrace at a memorial on Sunday, Nov. 7, 2021. (AP Photo/Robert Bumsted)

As young as a high school freshman and from as far away as Washington state. Authorities on Monday released the identifies of the eight people who died after fans at the Astroworld music festival in Houston suddenly pushed forward when rapper Travis Scott came on stage.

Harris County officials did not release the cause and manner in which the victims died. Michele Arnold, a spokeswoman with the Harris County Institute of Forensic Sciences that conducts all autopsies in Harris County, said in a statement it could be weeks before that information is available.

A picture of some of the people who died emerged over the weekend as their families and friends shared stories with reporters and on social media.

The dead ranged from 14 to 27 years old, according to Houston officials. As of Sunday, 13 people remained hospitalized. Harris County officials said Monday they didn’t have updated information on those who were hospitalized.

City officials have said they are in the early stages of investigating what caused the pandemonium at the sold-out event founded by Scott and attended by about 50,000 fans.

Franco Patino, 21, was working toward a mechanical engineering technology degree at the University of Dayton, with a minor in human movement biomechanics, his father, Julio Patino, told The Associated Press. He was a member of Alpha Psi Lambda, a Hispanic interest fraternity, and the Society of Hispanic Professional Engineers, and was working in an engineering co-op program.

Patino described his son as a charismatic, energetic leader who was active in his community and intent on helping people with disabilities. His son was working on a new medical device and wanted to find a way to help his mother walk again after she was severely injured in an automobile accident in Mexico two years ago, Patino said.

Through tears, Patino described how his son — who enjoyed weight lifting, football and rugby — used his strength to break a door and free his mom from the wreckage.

“He loved his mom,” Patino said. “He said everything that he was doing, it was trying to help his mom. The entire goal.”

Julio Patino, of Naperville, Illinois, was in London on business when the phone rang around 3 a.m. He answered it and heard his wife, Teresita, crying. She said someone had called from a hospital about Franco and that a doctor would be calling her soon. After 30 minutes, she called back with the doctor on the line.

“The doctor was giving us the news that our son had passed away,” Patino said.

Patino said he had last spoken with his son about 2 p.m. Friday, when he reassured his father he was fine.

‘HUGE HOLE IN OUR LIVES’

Jacob “Jake” Jurinek, 20, was a junior at Southern Illinois University-Carbondale, where he was “pursuing his passion for art and media,” his family said in a statement Sunday. He was just a over two weeks short of his 21st birthday.

He was attending the concert with Patino, his friend and former high school football teammate, according to Patino’s father, Julio Patino. He was deeply committed to his family and was known as “Big Jake” by his younger cousins.

He will be missed by his father, Ron Jurinek, with whom Jake became especially close after his mother died in 2011.

“In the decade since, Jake and Ron were inseparable – attending White Sox and Blackhawks games, sharing their love of professional wrestling, and spending weekends with extended family and friends at Jake’s favorite place, the family cottage in Southwestern Michigan,” the family’s statement said.

“We are all devastated and are left with a huge hole in our lives,” his father, Ron Jurinek, added in an emailed statement.

Memorial High School ninth-grader John Hilgert, 14, was the youngest of those who died. Mourners began tying green ribbons around trees at the school over the weekend in his memory.

He was at the concert with classmate Robby Hendrix, whose mother, Tracy Faulkner, spoke with the Houston Chronicle. The boys had hoped to get a good spot to watch the show.

“Everything about that night was a tragedy,” Faulkner told the newspaper. “John was a good student and athlete and so polite. He was the sweetest and smartest young man.”

‘LIFE OF THE PARTY’

Madison Dubiski, 23, lived in Houston. She was a varsity cheerleader in high school and member of a community service group called the National Charity League, according to a former classmate who spoke to the Houston Chronicle.

“She was definitely the life of the party and loved by so many people,” Lauren Vogler told the newspaper.

She was her mom’s best friend and she loved watching her brother play sports, family friend Claudia Sierra told the Chronicle.

Mirza “Danish” Baig, who identified himself on Facebook as a district manager for AT&T, and appeared to be a devoted Dallas Cowboys fan, was among those who died at the the concert, his brother Basil Baig said on Facebook.

“He was (an) innocent young soul who would always put others before him. He was a hard-working man who loved his family and took care of us. He was there in a heartbeat for anything. He always had a solution to everything,” Basil Baig told ABC News.

Baig’s funeral was held Sunday in Colleyville in the Dallas-Forth Worth area. Messages left with Basil Baig were not returned.

County officials identified him as Mirza Baig, but his brother said on Facebook he went by Danish. He was 27.

Brianna Rodriguez’s family told People magazine that she was among those who perished at the concert. She was 16, a student at Heights High School and loved dancing, according to the family the magazine spoke with. Her family has not responded to a message left by AP.

Axel Acosta, 21, was a computer science major at Western Washington University. His father, Edgar Acosta, told KOMO-TV his son was among the victims who died at the festival.

The school in Bellingham, Washington, released a statement Sunday: “By all accounts, Axel was a young man with a vibrant future. We are sending our condolences to his family on this very sad day.”

Rodolfo “Rudy” Pena, 23, of Laredo, Texas, was a student at Laredo College and wanted to be Border Patrol agent, his friend Stacey Sarmiento said. She described him as a people person. Officials identified him as Rodolfo Pena, but friends called him Rudy.

“Rudy was a close friend of mine,” she said. “We met in high school. He was an athlete. … He brought happiness anywhere he went. He was easy to get along with. It was like positive vibes from him at all times.”

“We all came to have a good time … it was just horrible in there,” she added.