The nursery rhyme goes: “Jack and Jill went up the hill to fetch a pail of water. Jack fell down and broke his crown and Jill came tumbling after.”

It was written as a bit of anonymous, scurrilous political comment about England’s King Charles I and his hated French wife but we can reassure you that the Shawnigan Players latest play, Jack and Jill, by Jane Martin, doesn’t drag anyone back into history.

This Jack (Matt Williams) is a bruising but bruised fellow and his Jill (Laura Faulkner) doesn’t really seem to want to follow anyone. 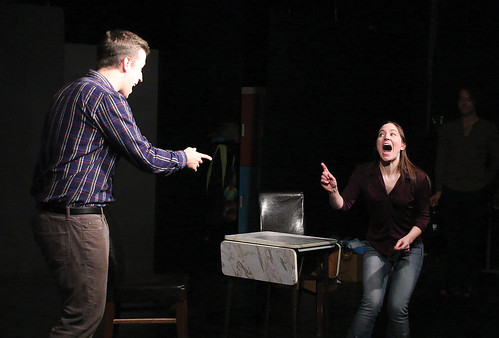 In fact, when they meet, the watcher wonders if they will ever even meet for coffee.

But when they sit down, things really start to move fast.

Williams has already proved himself an actor who can handle a hot, physical scene and here he has plenty of scope and Faulkner is more than ready for him.

Her talent and versatility is also well known among theatregoers but as Jill she has her work cut out for her in trying to make this jagged little gal into someone worth caring about.

On paper the story looks pretty tough to digest as the pair try to play their game of mental Scrabble with very few vowels but the quality of the acting make both Jack and Jill human.

Their relationship lurches forward like a car with transmission trouble and reaches a climax when plates start to fly.

For an audience it’s sometimes difficult to watch, though, as the dialogue reaches out and finds the weak spots in everyone’s armour.

But, don’t hold back on that account: the result is magical and proves yet again the depth of talent that can be found in the Valley’s theatre community.

Tickets are $15 each at Ten Old Books in Duncan, Mason’s in Shawnigan Lake, Butler Locksmithing in Lake Cowichan, or reserve through email at Shawniganplayers@gmail.com

BC Liquor Stores to start rationing alcohol amid ongoing strike